Champagne Trying to Defeat the Heat

Winemakers are stressing out over weather swings. 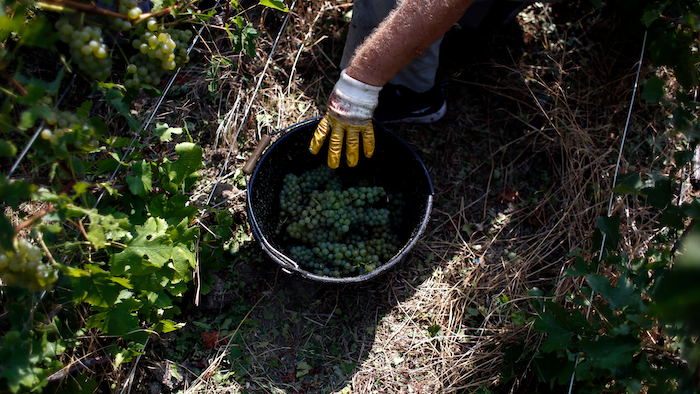 In this photo taken on Tuesday, Aug. 28, 2018, a worker picks white grapes during the grape harvest season in the Champagne region, in Chouilly, eastern France. Temperatures have risen 1.2 degrees Celsius (2.16 F) in 30 years, and pickers are scrambling to bring in yet another early harvest. The specter of climate change is haunting the vineyards of France, and its creeping effects, including chaotic weather, are becoming the new normal.
AP Photo/Thibault Camus

CHOUILLY, France (AP) — Jean-Pierre Vazart has more than a dozen weather apps on his phone. But the winemaker, who grows Chardonnay grapes in France's Champagne region, is still stressed out.

Temperatures have risen 1.2 degrees Celsius (2.16 F) in 30 years, and pickers are scrambling to bring in yet another early harvest. The specter of climate change is haunting the vineyards of France, and its creeping effects, including chaotic weather, are becoming the new normal.

For now, winemakers say they are benefiting from the warmer temperatures, with ripe grapes begging to be picked. But Vazart, 50, is worried a sudden hailstorm could devastate his succulent white grapes before the end of his 12-day harvest period, which began Monday. Rainstorms and hail compromised last year's less abundant Champagne harvest.

"The stress is with you ... until the last day," said Vazart from Chouilly, near Epernay, the epicenter of the Champagne region, which counts some 15,000 winegrowers.

It's the fifth time in 15 years that the harvest — traditionally a September ritual that can run into October — has started so early, according to Comite Champagne, which groups all industry players.

To counter the effects of global warming, scientists are planting the seeds of a small revolution in Champagne country: inseminating flowering grapes with pollen from lab plants to try to develop more weather-resistant varieties. If successful, the process would add to the seven authorized Champagne grape varieties — with Pinot Noir, Chardonnay and Meunier mainly used — to create the crisp, bubbly Champagne with its perfect mellow notes.

Creating new grape varieties might once have been unthinkable in a land where each step of the Champagne-making process is rigidly codified. But grapes of the future — with new names but the taste of Champagne's "terroir" — are already being tested in three experimental vineyards. The projects, which began in 2014, may produce one or two new grape varieties, according to Arnaud Descotes, technical and environmental director of Comite Champagne.

He stressed that results won't be known for at least a decade, and the grapes would be rejected if blind taste tests fail to ensure the bubbly is not corrupted.

The Champagne region calls itself a pioneer of sustainable development, saying it's the first in the winegrowing world to measure its carbon footprint, which it said it reduced by 7 percent from 2003 to 2013. Officials are looking to lower greenhouse gases by 25 percent in 2025. Reducing the weight of the famously heavy Champagne bottles by 65 grams was among crucial measures.

The region isn't unique in its experimental drive. Elsewhere in France, researchers are also seeking ways to create heat-friendly grapes and protect the country's wine industry, both a multibillion dollar export market and part of the national identity.

In a taste-and-tell bid to show the effects of climate warming on the famed wines of Bordeaux, in southwest France, a noted oenologue, biologist and winegrower created "2050," his wine of the future. Pascal Chatonnet assembled standard varieties used in Bordeaux wines but from the French Mediterranean region of Languedoc-Roussillon and the North African nation of Tunisia.

Tasted by the publication Science et Avenir, it was deemed drinkable but different, with tastes of red fruit but "very ripe, a bit cooked, with a final short, chocolatey note." Not Bordeaux.

For Vazart, optimism is essential.

"If we believed only the bad news, we'd change jobs now," he said.