The work will return the ship to full capability after nearly four years of inactive status. 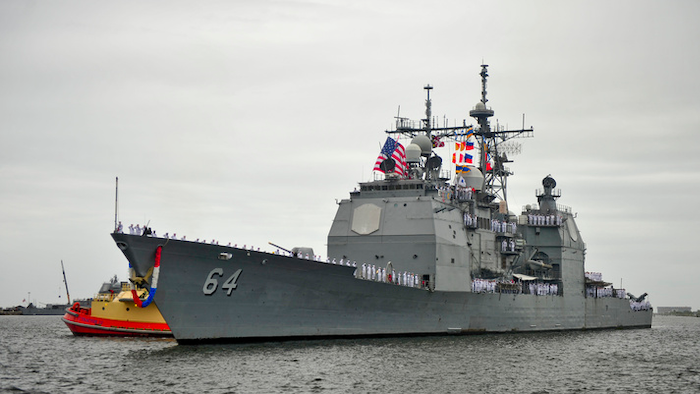 The USS Gettysburg will undergo about 15 months of work at the company’s shipyard in Norfolk, Virginia, the ship’s homeport.
BAE Systems

BAE Systems was awarded a $146.3 million contract from the U.S. Navy to modernize the guided-missile cruiser USS Gettysburg (CG 64).

The Gettysburg will undergo about 15 months of work at the company’s shipyard in Norfolk, Virginia, the ship’s homeport.

The contract includes options that, if exercised, would bring the cumulative value to $151.3 million.

Starting in January 2019, the Gettysburg will undergo extensive repair and upgrade work that will return the ship to full capability after nearly four years of inactive status under the Navy’s cruiser modernization program.

BAE Systems’ Norfolk shipyard performed the initial modernization work on board the ship in 2016, including the removal of obsolete equipment and replacement of critical aluminum shipboard structures.

Under the new contract, BAE Systems will upgrade the ship’s weapons and engineering equipment; support the installation of a new Aegis combat system, new communications suite and the Consolidated Afloat Network Enterprise Systems (CANES); and renovate the crew’s living spaces aboard the 27-year-old ship.

The work is scheduled to be complete in March 2020. BAE Systems’ work is expected to extend the service life of the Gettysburg to 2035.