The company may struggle to find all the workers it will eventually need. 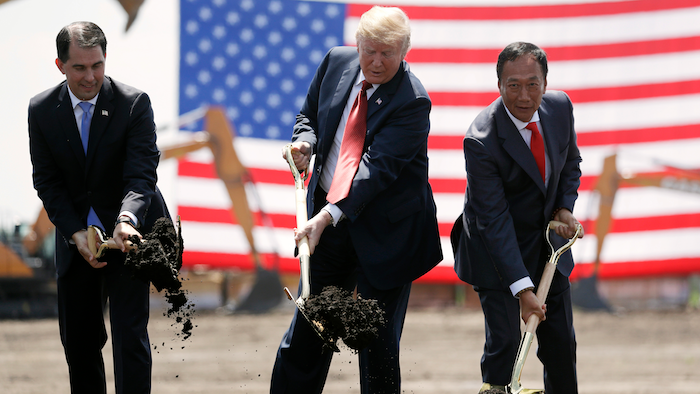 In this June 28, 2018, file photo, President Donald Trump, center, along with Wisconsin Gov. Scott Walker, left, and Foxconn Chairman Terry Gou participate in a groundbreaking event for the new Foxconn facility in Mt. Pleasant, Wis. To make the next generation of liquid crystal display technology, Foxconn Technology Group will draw talent from beyond the borders of Wisconsin, partner with universities and technical schools and even tap into transitioning members of the military to find the 13,000 workers it eventually expects to hire.
AP Photo/Evan Vucci, File

MILWAUKEE (AP) — Foxconn Technology Group will cast a wide net to find the 13,000 workers it eventually expects to hire at its new North American manufacturing plant, partnering with universities and technical schools and even tapping into transitioning members of the military.

Foxconn's next generation of liquid crystal display technology that will be produced in southeastern Wisconsin, the first LCD panel glass fabrication plant in the United States, will be used in a wide range of devices and systems, including televisions, monitors, electronic notebooks and self-driving cars.

The Taiwanese company is investing $10 billion to construct a 20-million-square-foot campus, a space equivalent to about 350 football fields, along an interstate about halfway between Milwaukee and Chicago.

With Wisconsin's 2.9 percent unemployment near its record low, Foxconn may struggle to find all the workers it will eventually need.

"It presents a workforce challenge for the state of Wisconsin and the region," said Jim Paetsch, a vice president at Milwaukee 7, a regional economic development group. "It's all hands on deck with the economy as it is."

Paetsch said the answer, in part, lies outside Wisconsin.

"We have a demographic problem. We're not growing at the same rate as the United States as a whole. Foxconn gives us an opportunity to reverse the demographic trend by recruiting and drawing populations from other states."

The Wisconsin Economic Development Corporation (WEDC), a public-private agency promoting business, will spend $1 million this fiscal year to promote Wisconsin's career and lifestyle advantages for potential workers in the Chicago area, as well as to alumni of the state's universities who have moved away. Other Midwestern cities, including Detroit and Minneapolis, may also be targeted.

"We have done perception studies around the country and what you hear is beer, cheese and Packers and sometimes cold weather," Maley said. "There's a lot more to Wisconsin."

The effort to attract millennials is part of a $6.8 million campaign that also targets military veterans nationwide preparing to leave active duty and hunting for their next job. Kathy Still, the state's assistant deputy secretary for veterans affairs, said veterans make attractive hires.

"They know how to show up to work and bring a lot of soft skills, including leadership," Still said.

Hiring veterans has been part of Foxconn's plans from the start. Already two veterans are on board to recruit as many as 3,000 others to Foxconn. And, in an agreement with Rockwell Automation Inc., Foxconn committed to hiring graduates of a program that's working to train 1,000 veterans by 2020.

Foxconn has said it will need thousands of engineers for its complex in the Racine County community of Mount Pleasant. Key to finding those engineers is partnerships the company is building with colleges, universities and technical schools.

Foxconn was not on Levi Speckman's radar when he enrolled in electrical engineering classes at Gateway Technical College in southeastern Wisconsin two years ago.

But now, as Speckman, 19, prepares to transfer to Milwaukee School of Engineering to complete his undergraduate degree, Foxconn is very much a part of his life and he hopes will be his future.

"I hope to be engineering the product they produce," Speckman said of Foxconn's plans to build the "largest corporate attraction project in U.S. history as measured by jobs," according to WEDC.

Speckman interned this summer at Foxconn's temporary testing facility near the spot where ground was broken in June by President Donald Trump, Walker and other politicians to signal the start to construction on the massive campus.

"I'm doing maintenance and repair for the production line and testing out some different technology," said Speckman, who will try for a permanent job with Foxconn when he finishes his degree at MSOE.

Foxconn is also partnering with the University of Wisconsin-Milwaukee to recruit engineering students. A recently signed agreement between the company and university will initially involve five UWM students who will spend time with Foxconn in Wisconsin this fall, then will travel to Taiwan in February to take classes and begin work on applied research projects at Chung Yuan Christian University through June 2019. They will complete their degrees back in Wisconsin, possibly while working for Foxconn.

UWM Chancellor Mark Mone says the partnership will be a model for other universities that want to enter into such an agreement.

It will give students "a valuable hands-on international working experience and apply their learning in a real world, global environment," Louis Woo, special assistant to Foxconn founder and CEO Terry Gou, said when announcing the UWM agreement.

Beyond the partnerships with technical schools, colleges and universities, Milwaukee leaders hope Foxconn will tap a pocket of potential workers located about 2 miles from its downtown headquarters.

UWM's Center for Economic Development found that only 36 percent of working-age males are employed in the 53206 ZIP code, and the poverty rate for children there is about 66 percent.

"If we don't have a very intentional way of being able to connect those people to the opportunities that are being provided right now, then we'll still miss the boat," Hamilton said.

Foxconn, also known as the Hon Hai Precision Industry Co., Ltd., is headquartered in New Taipei City, Taiwan and has facilities in Asia, Europe and Latin America. In comparison with the talent pool available in North America, Woo doesn't think 13,000 is a tall order.

"I think that's where the innovations, where the high technology, where the talents are," said Woo. "If you don't come here to harness this pool of talent you would be foolish."

Foxconn Deal Could Mean $3B in Incentives