Tesla spent millions as it reached a goal of producing 5,000 Model 3 sedans per week by the end of June. 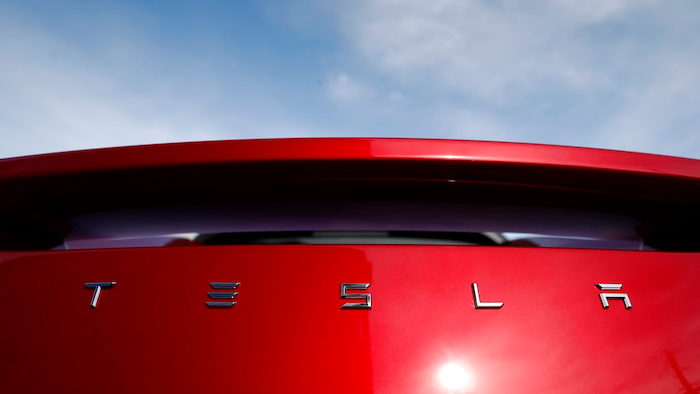 In this April 15, 2018, file photo, the sun shines off the rear deck of a roadster on a Tesla dealer's lot in the south Denver suburb of Littleton, Colo. Tesla’s second-quarter revenue should grow by more than $1 billion as it delivered more Model 3 electric cars. But analysts predict it won’t be enough to stop the company’s net loss from rising dramatically when the Palo Alto, Calif., company reports earnings after the bell Wednesday, Aug. 1.
AP Photo/David Zalubowski, File

But CEO Elon Musk pledged to post net profits in future quarters, and on a conference call, he apologized to two analysts he cut off on the company's first-quarter call. Telsa's shares jumped 9.3 percent to $328.85 in after-hours trading.

The net loss more than doubled from the same quarter a year ago, and was slightly larger than the first quarter. But Tesla's cash burn in the second quarter slowed from about $1.1 billion.

On the call, Musk also said he expects the company to avoid returning to the markets for capital and to be "essentially self-funding on a go-forward basis." Tesla would use money generated from sales to fund big projects such as an estimated $2 billion new factory in China and another plant in Europe, he said.

The company also said that Model 3 gross profit margins turned slightly positive during the quarter as it worked out expensive kinks in its manufacturing system.

Last quarter, Musk mistreated two analysts by calling their queries about the company's cash needs and Model 3 orders "so dry" and "not cool." The call triggered a stock sell-off and raised questions about Musk's behavior.

But on Wednesday, a contrite Musk apologized to both and said he was tired from working more than 110 hours per week last quarter. "It's not right," he told an analyst from RBC Capital Markets. "Hope you accept my apologies."

In a statement released after the markets closed Wednesday, Tesla said it expects to produce 50,000 to 55,000 Model 3s in the third quarter, an increase of at least 75 percent from the first quarter.

Cash from selling the Model 3, which starts at $35,000 but runs far higher with options, is key to holding off more borrowing and turning a profit.

Tesla's cash balance fell to $2.2 billion in June, from $2.7 billion in the first quarter.

Musk said he expects the company to achieve sustained quarterly net profits from now on, barring an unforeseen event, supplier problems or economic downturn. He also said that production efficiencies should rise as more Model 3s are built, and he said that he expects to make to around 750,000 vehicles in calendar year 2020.

The company said it has cut back on capital spending by changing its strategy to produce the Model 3 on existing assembly lines, one in a giant tent, rather than adding all-new lines. Tesla projected total 2018 capital spending at just below $2.5 billion. That's substantially less than the 2017 level of $3.4 billion.

The Palo Alto, California, company said it lost $4.22 per share from April through June as revenue grew 43 percent to just over $4 billion. Adjusted for stock-based compensation, the company lost $3.06 per share. That was worse than Wall Street estimates. Analysts polled by FactSet expected a $2.88 loss per share.

Tesla also said it's working on a new version of its Autopilot semi-autonomous software that will have greater safety features.

During the second quarter, Tesla laid off 9 percent of its workforce as it worked toward Musk's promise of making money. The company has never turned an annual profit and has had only two profitable quarters since becoming public in 2010. Tesla has also asked parts suppliers for refunds.