North Dakota's case is being called "a long shot." 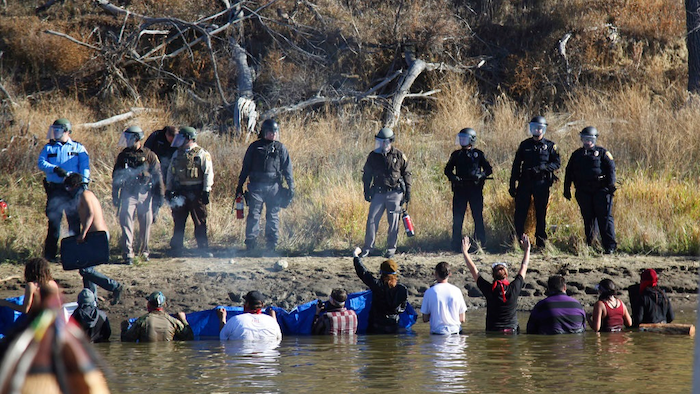 BISMARCK, N.D. (AP) — North Dakota on Friday demanded $38 million from the federal government to reimburse the state for costs associated with policing large-scale and prolonged protests against the Dakota Access oil pipeline.

Attorney General Wayne Stenehjem filed an administrative claim against the Army Corps of Engineers, contending the federal agency allowed protesters to illegally camp without a permit between Aug. 10, 2016, and March 31, 2017, on federal land along the Missouri River in southern North Dakota and failed to maintain law and order.

The Corps inaction "required North Dakota to provide a sustained, large-scale public safety response to prevent deaths, and protect property and public safety, including that of the protesters," Stenehjem wrote.

If the claim isn't paid or settled in six months, the state can sue in federal court, the attorney general said in a statement. The federal Justice Department declined comment. Corps officials have said previously that the protesters weren't evicted due to free speech reasons.

North Dakota's case "is a long shot," according to University of St. Thomas law professor Gregory Sisk, an expert on civil litigation with the federal government. He said typical claims involve such things as a government employee causing damage or injury.

"When you get beyond those ordinary or garden-variety (claims) to alleging the government effectively failed to do a good job as the government, those types of suits don't succeed," he said.

The $3.8 billion pipeline was built by Texas-based Energy Transfer Partners to move North Dakota oil through South Dakota and Iowa to a shipping point in Illinois. It began operating a year ago, though four American Indian tribes in the Dakotas are still fighting it in court.

During construction, opponents who feared environmental damage gathered in the thousands in southern North Dakota, setting up camps on federal land that morphed into small cities.

Protesters often clashed with law enforcement who established their own operations center a short distance away, resulting in 761 arrests from August 2016 to February 2017.

"The protesters' sprawling encampments, with virtually no sanitation facilities, and their contamination of the land and water during their 'occupation,' were all in violation of federal law," Stenehjem said.

The pipeline construction spanned two presidential administrations, with the protests beginning while Barack Obama was in the White House. President Donald Trump just days after taking office in January 2017 pushed through completion of the stalled project.

Gov. Doug Burgum last year asked Trump for a disaster declaration to cover the costs of the protest, but the request was denied. State pleas for the federal government to send law officers during the protests also were rejected.

"Federal support was extremely limited, and non-existent other than minimal technical and liaison work," Stenehjem said.

About 75 state and local officers were deployed on a typical day during the protests, though the number jumped to as many as 540 during one skirmish, according to the state Department of Emergency Services. Officers from several other states were brought in to help with the policing effort. Authorities eventually moved in and shut down the protest camps in February 2017 amid concerns about spring flooding.

Energy Transfer Partners has given North Dakota $15 million to help with the bills, but Stenehjem said the money was "a gift to the people of North Dakota" and "not intended to offset the obligation of the Corps."

The state also has received a $10 million grant from the U.S. Justice Department for policing-related costs.

"If the Corps thinks they are entitled to some sort of offset for the $10 million grant from the Department of Justice, I look forward to their reasoning," Stenehjem said.