The unmanned spacecraft loaded with nearly three tons of supplies docked at the station less than four hours after the launch. 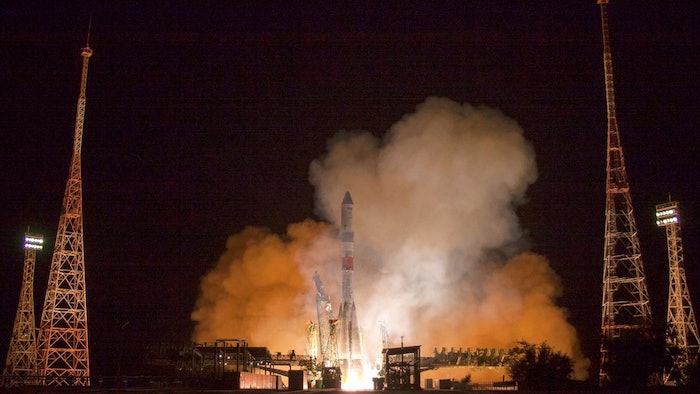 In this photo provided by Roscosmos Space Agency Press Service on Tuesday, July 10, 2018, Russian cargo ship Souz 2,1A takes off from the launch pad at Russia's main space facility in Baikonur, Kazakhstan. A Russian cargo ship has delivered a fresh load of fuel, food, and other supplies for the International Space Station.
Roscosmos Space Agency Press Service photo via AP

MOSCOW (AP) — A Russian cargo ship delivered a fresh load of fuel, food, and other supplies for the International Space Station on Tuesday, making it in record time.

The Progress MS-09 lifted off as scheduled at 3:51 a.m. (2151 GMT; 5:51 p.m. EDT Monday) from the Russia-leased Baikonur Cosmodrome in Kazakhstan. The unmanned spacecraft loaded with nearly three tons of supplies docked at the station in automatic mode less than four hours after the launch.

It marked the first time such a fast-track approach was used. In the past, it took the Progress ships up to two days to reach the space outpost.

Russia's space agency Roscosmos said the faster maneuver became possible thanks to a new version of the Soyuz booster rocket, noting that it puts the ship into orbit with higher precision.

NASA said that the fast trip to the station was intended to test an expedited capability that could be used on future Russian cargo and crew launch missions.

"It's a new achievement by our engineers," Russian cosmonaut Fyodor Yurchikhin said on state television. He added that after being tested on unmanned Progress vehicles the new fast approach will also be used by manned Soyus spacecraft that deliver crews to the station.

Roscosmos first tried to use the new maneuver last year, but it was aborted for technical reasons.

Roscosmos director Dmitry Rogozin hailed the faster rendezvous as a "big step forward" in a call with Russian crew on board the station after the docking.

Rogozin tweeted that the fast-track approach will be used in the future for assembling spacecraft in orbit for missions into deep space.