But the plant will remain for another sixty years at least, housing its spent fuel. 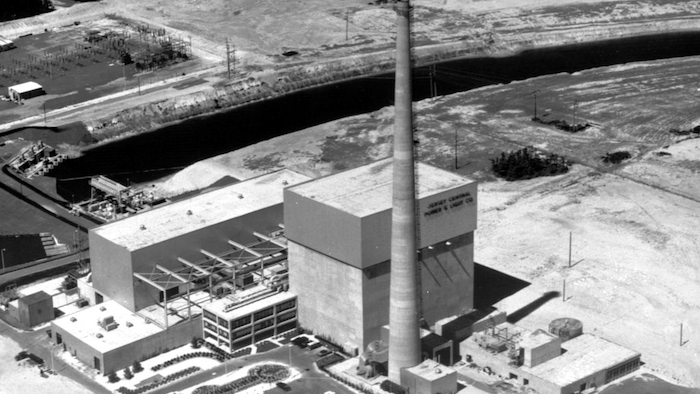 This July 12, 1972 file photo shows the Oyster Creek nuclear power plant in Lacey Township, N.J. Federal regulators say America’s oldest nuclear power plant will shut down Sept. 17, 2018, and plans to have its reactor fuel placed into dry storage within about six years. But the Oyster Creek plant, which opened in 1969, will remain in Lacey Township, New Jersey, until nearly the end of this century.
AP Photo, File

LACEY TOWNSHIP, N.J. (AP) — America's oldest nuclear power plant will shut down on Sept. 17, but the Oyster Creek plant near the New Jersey shore will stay right where it is for the next 60 years.

Officials with the U.S. Nuclear Regulatory Commission held a briefing Monday on shutdown plans for Oyster Creek, which opened in 1969. They said Chicago-based Exelon plans to remove the remaining nuclear fuel rods from storage pools and put them into dry storage within 5½ years of the shutdown date.

All told, it will cost $1.4 billion to shut down the plant; Exelon currently has $982.1 million of that set aside in a decommissioning account, NRC officials said.

Although the plant will stop producing electricity just before summer ends, radioactive material could be on site until the late 2070s, if not later.

"There is no national repository for spent fuel at this point," said Neil Sheehan, a spokesman for the commission. "The only option for operators is to store the spent nuclear fuel on site."

The NRC is considering applications to erect a national nuclear waste depository either in Texas or New Mexico, but has not decided on either, Sheehan said.

Ray Powell, an NRC decommissioning official, said Exelon already has moved nuclear fuel roads into 34 dry storage units called casks, steel containers encased in concrete that are designed to safely store the material while its radioactivity decreases over time. Another 40 casks will be filled with the remaining nuclear fuel roads once the plant shuts down, he said.

Those casks will be guarded around the clock, and are designed to withstand natural disasters including floods and earthquakes.

The NRC said Chicago-based Exelon, which owns Oyster Creek, will put it into so-called "safe store" condition until 2075 as radiation levels dissipate. Dismantling of the plant itself should take place between 2075 and 2078, they added.

But Suzanne D'Ambrosio, a spokeswoman for Exelon, said "the timeline could be much shorter."

"The used fuel will be stored on site in robust metal canisters housed in a massive concrete housing," she said. "The storage facility is highly secured and the casks are impervious to weather and risk of attack. The canisters emit very low, if any, measurable levels of radiation and they present no danger to the public."

The plant reached a deal with New Jersey regulators to shut down earlier than permitted in return for not having to build at least one costly cooling tower.

As part of changes to the plant's emergency response system, a 10-mile emergency zone surrounding the plant, where specific evacuation and response events would happen in the event of an emergency, may be eliminated once the fuel cools to the point where a melting accident is considered unlikely, NRC officials said.

A public hearing on Exelon's decommissioning plans is scheduled for July 17 in Lacey Township.