Fears are growing about the impact of a wider trade war with adversaries and allies alike. 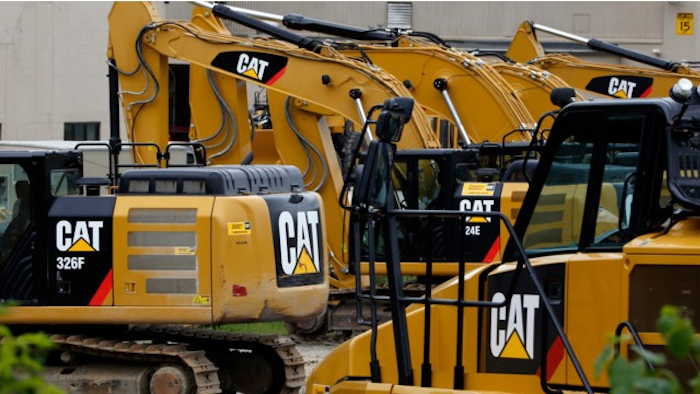 SEGUIN, Texas (AP) — Dozens of half-built engines, more than twice the size of a car engine, stand in a row. They slowly roll ahead on a conveyor belt, stopping periodically as workers run quality checks, install fuel lines and tighten bolts with power wrenches.

The San Antonio Express-News reports these engines, ranging in size from nine to 18 liters, are used in generators, oil and gas operations and industrial applications. Nearly three out of four of them are heading out of the country to foreign markets.

The Caterpillar plant, its engines and the 2,000 people who work here are reminders of the stakes involved as the trade conflict between the United States, China and other countries escalates with new rounds of tariffs and retaliatory actions. Caterpillar is part of a broader heavy machinery and equipment manufacturing industry in Texas that employs about 90,000 people and shipped more than $40 billion in industrial machinery to international buyers last year, making it the state’s second leading export after petroleum and accounting for 16 percent of all Texas exports.

“Many of our Texas member companies are multinational, they operate all over the world,” said Tony Bennett, chief executive of the Texas Association of Manufacturers as he considered rising trade barriers. “We will not go unscathed.”

Fears are growing about the impact of a wider trade war with adversaries and allies alike as the Trump administration moves to alter U.S. trade policies, slapping steep tariffs on foreign steel and aluminum on which manufacturers across Texas and the United States rely and threatening to tear up the North American Free Trade Agreement with Mexico and Canada. Stock and commodity markets around the world sold off Tuesday, a day after President Donald Trump threatened to impose tariffs on an additional $200 billion in Chinese products, and up to $400 billion if China retaliates.

Illinois-based Caterpillar is considered a bellwether of the global economy because of its vast international reach and last year earned more than half of its $45 billion in revenues from foreign sales. Caterpillar spokeswoman Rachel Potts said the company is assessing the potential impact of changing trade policies and lobbying the Trump administration to reconsider recent moves that could make it harder for U.S. companies to sell into foreign markets.

“Right now, is there a level of geopolitical uncertainty in the world that could impact us? Yes,” Potts said. “Are we engaged on all of those talks? Yes.”

The Trump administration has done much to create that uncertainty, last week announcing it would go forward with that 25 percent tariffs on $50 billion worth of Chinese goods — from tires to ship turbines to can sealing machines — starting in July. China immediately retaliated, readying tariffs of a similar scale on U.S. agricultural and other products These moves came just weeks after the Trump administration added Canada, Mexico and the European Union to the list of trading partners getting hit with tariffs on steel, again provoking retaliatory actions.

For the time being, the brewing trade war is expected to have a small impact on the U.S. economy, which is driven by domestic spending. Exports account for about 13 percent of the goods and services produced in the United States, according to the Commerce Department.

Still, trade disruptions could hurt specific industries, such as those that import lower-cost foreign steel, raise prices for consumers and slow the economic expansion. And few states have as much at stake in the trade conflict as Texas. Texas sells more goods in international markets that any other state, exporting some $265 billion in products in 2017, according to the Commerce Department. Texas also imported one-sixth of all foreign steel coming into the United States, also more than any other state, according to an analysis by the Brookings Institution, a Washington think tank.

Canada, Mexico and China are Texas’ top export markets, and already the prospect of deteriorating trade relations is creating uncertainty that is leading companies to delay investments and hiring, said Bennett of the Texas Association of Manufacturers.

“If you’re exporting out of Texas, particularly to Mexico and Canada, you can’t really make any plans for plant expansion, plant location,” Bennett said. “It puts everybody in a holding pattern and is not an efficient way of doing business in a global economy.”

Caterpillar employs about 4,000 employees in Texas, spread across more than 20 facilities in the state, including San Antonio and Schertz. The Seguin plant, built in 2010 for $170 million, is one of the largest employers in this city of 29,000. The Guadalupe County Appraisal district estimates that in 2018 the Seguin Independent School District could bring in as much as $1.5 million in taxes from the plant, accounting for about 5 percent of the $31 million in property taxes Seguin ISD said it would collect for its 2017-2018 budget.