The numbers that collectively sketch a picture of a vibrant economy don't reflect reality for a range of Americans who still feel far from financially secure. 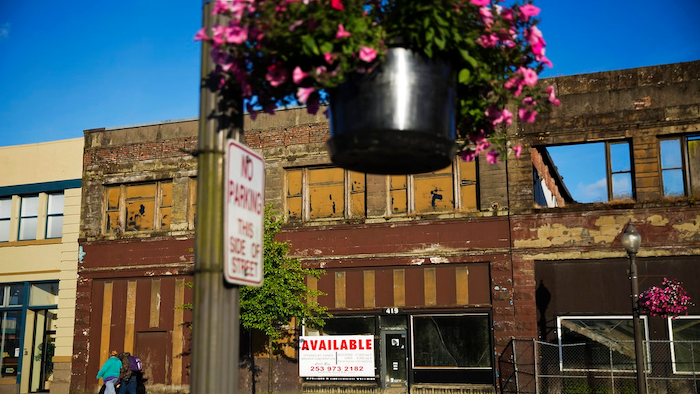 In this June 16, 2017, file photo, dilapidated storefronts stand along baskets of pink petunias that hang from light posts all over town, watered regularly by residents trying to make their city feel alive again in Aberdeen, Wash. From drivers paying more for gas and families bearing heavier child care costs to workers still awaiting decent pay raises to couples struggling to afford a home, people throughout the economy are straining to succeed despite the economy’s gains.
AP Photo/David Goldman, File

And it is. Steady hiring has shrunk unemployment to 3.8 percent — the lowest since the 1960's. Consumers are spending. Taxes are down. Inflation is tame. Factories are busy. Demand for homes is strong. Household wealth is up.

Yet the numbers that collectively sketch a picture of a vibrant economy don't reflect reality for a range of Americans who still feel far from financially secure even nine years into an economic expansion.

From drivers paying more for gas and families bearing heavier child care costs to workers still awaiting decent pay raises and couples struggling to afford a home, people throughout the economy are straining to succeed despite the economy's gains.

They are people like Katy Cole, a 33 year-old music teacher from North Creek, New York, who's still repaying her student loans. It took her two years of working a second job to repair her credit and amass enough money to try to buy a home with her boyfriend. She just gave birth last month — the fourth child in her blended family — which means having to take unpaid leave from her school job.

"As far as the numbers saying everyone is working, that's great," Cole said. "But is everybody surviving? I don't think so. In a great economy, everybody is thriving — and not just a certain group."

When analysts at Oxford Economics recently studied American spending patterns, they found that the bottom 60 percent of earners was essentially drawing on their savings just to maintain their lifestyles. Their incomes weren't enough to cover expenses.

"Many people are still living on a paycheck-to-paycheck basis," said Gregory Daco, head of U.S. economics at Oxford.

Daco and other economists describe the economy as fundamentally healthy, a testament to the durable recovery from the 2008 financial crisis. The job market, in particular, is booming. But even many people who have jobs and are in little danger of losing them feel burdened and uneasy.

Here's a look at the economy from their perspectives:

Even with inflation running at a relatively low 2.4 percent, one particular expense is weighing on anyone idling in traffic: Gasoline prices have surged 24 percent over the past year to a national average of $2.94 a gallon, according to AAA. That's the highest average since 2014.

Analysts at Morgan Stanley have estimated that the increase this year will likely eat away a third of people's savings from Trump's tax cuts. Gas prices are still below their high reached roughly a decade ago. Yet the increase this year represents an additional financial burden on consumers and businesses compared with a year ago.

A strong job market can actually be a curse for would-be homebuyers. With more people drawing paychecks and able to afford a home, demand has intensified. Yet the number of homes listed for sale is flirting with historic lows. The combination of high demand and low supply has driven prices to troubling high levels.

It's not just that home ownership is largely unobtainable in San Francisco or Seattle. The Case-Shiller index shows that home prices are rising more than 6 percent annually in Atlanta and Minneapolis. In the Detroit metro area, they're up nearly 8 percent over the past 12 months. By contrast, average hourly wages have risen just 2.7 percent over the past year.

The real estate brokerage Redfin says the median sales price in the 174 markets it covers has jumped 6.3 percent over the past year to $305,600. A general rule of thumb is that buyers can afford a home worth roughly three times their income. So the median home sales price far exceeds what a typical U.S. household earning a median $57,000 income can manage.

On top of that, 30-year fixed-rate mortgages are growing costlier. The average interest rate on these mortgages has jumped to 4.62 percent — from 3.95 percent at the start of the year — according to mortgage buyer Freddie Mac.

$100 trillion. That's roughly the net worth of U.S. households and nonprofits, according to the Federal Reserve.

Problem is, America's wealth is increasingly lopsided, with the affluent and the ultra-wealthy amassing rising proportions and everyone else benefiting modestly if at all.

The top 10 percent of the country holds 73 percent of its wealth, a share that has crept steadily up since 1986, according to the World Inequality Database. The most sweeping gains are concentrated among the top 1 percent; this group holds nearly 39 percent of the wealth. And they're arguably poised to become even more prosperous because Trump's tax cuts largely favored the wealthiest slice of individual taxpayers.

Worse off is the bottom 40 percent of Americans: They have a negative net worth and almost no financial cushion in case of an emergency.

Most Americans can't draw on stocks, rental properties, capital gains or significant home equity to generate cash. They depend almost exclusively on wages. And after adjusting for inflation, the government reported that Americans' average hourly earnings haven't budged over the past 12 months.

It wasn't this way in May 2000, when the unemployment rate was nearly as low as today. Back then, only 30 percent of new jobs went to college graduates. Census figures show that only 30 percent of Americans older than 25 have college degrees, which means a majority of the country isn't receiving the full benefit from the sustained job growth.

For all their good fortune as the favored recipients of job growth, there's a major downside for recent college graduates. Obtaining a degree has increasingly coincided with ever-higher student debt loads. Since 2004, total student debt has climbed 540 percent to $1.4 trillion, according to the New York Federal Reserve. About 60 percent of college graduates from 2016 held debt, with an average of $28,400, according to the College Board. That figure doesn't include any graduate school debt. The Urban Institute found that advanced degree students borrowed an average of $18,210 in 2015 — about triple what undergraduates borrowed that academic year.

Mounting student debt could hinder the buying of homes and formation of families that helped growth in previous decades. A survey last year by the National Association of Realtors found that student debt was delaying home ownership by seven years among millennials, a generation it defined as people born between 1980 and 1998.

ANYONE PAYING FOR CHILD CARE

Children are immensely expensive. For nearly a third of families, the costs of child care swallowed at least 20 percent of their income, according to a survey posted in March by the caregiver jobs site Care.com. Nearly a third of parents said they went into debt to cover child care expenses.

When Care.com assessed how much its members were spending on day care centers for infants yearly, the average cost was $10,486, and it ranged as high as $20,209. Nannies were even pricier.

Research also suggests that some women remain outside the workforce because of the comparatively weak family leave and child care policies in the United States relative to those in other developed economies. A result is that families are forgoing income that would otherwise benefit them and the economy.

When the unemployment rate was last around 3.8 percent in 2000, the proportion of women who either had a job or were looking for one was peaking. For women ages 25 to 54, that proportion — called the labor force participation rate — was roughly 77 percent in 2000. It's now 74.8 percent.

If women's labor force participation were to return to 77 percent, there would be 1.4 million more women in the work force.