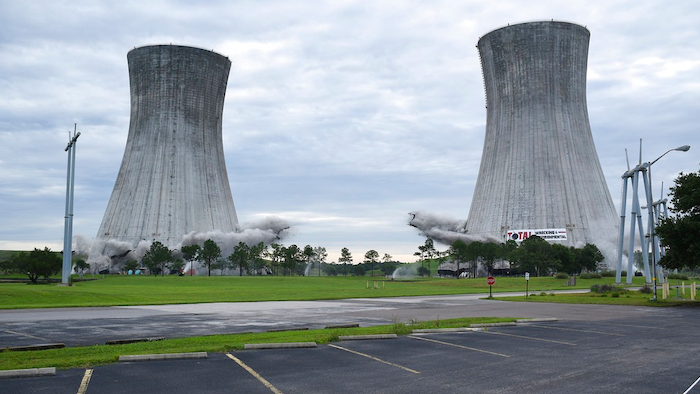 JACKSONVILLE, Fla. (AP) — Two cooling towers - both well over the length of a football field - came tumbling down in seconds on Saturday in Florida as part of an effort to dismantle a power plant.

The identical, 462-foot towers were imploded at St. Johns River Power Park in Jacksonville. After counting backward to one, a large blast sent the towers to the ground amid wild cheers. A huge cloud of smoke and dust plumed out and engulfed nearby trees.

Jacksonville Electric Authority and Florida Power & Light contracted Total Wrecking & Environmental to handle the implosion of the cooling towers and demolition of the power park for $14.5 million. The project is expected to be completed in April 2020.

They were the second tallest cooling towers to be imploded in the world, Total Wrecking & Environmental said.

Preparation took about 10 weeks for the implosion. It was over in just more than 10 seconds. More than 1,500 pounds of dynamite and 12,000 linear feet of detonation were used.