The contract marks a big step as federal officials look to get Los Alamos back on track after safety lapses and missed goals. 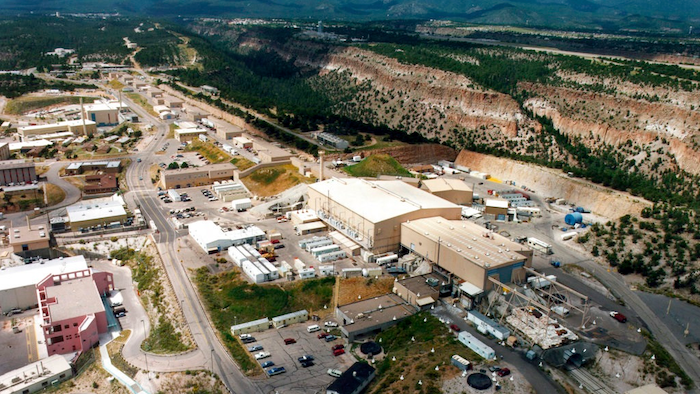 This undated file aerial photo shows the Los Alamos National laboratory in Los Alamos, N.M. The U.S. government has awarded a team of two universities and a research firm with offices around the world a $2.5 billion-a-year contract to manage Los Alamos National Laboratory.
The Albuquerque Journal via AP, File

ALBUQUERQUE, N.M. (AP) — Overseeing a top nuclear weapons laboratory that has had security and safety problems will be the responsibility of a new management team that includes two universities and a research firm that does work around the world, the U.S. government announced Friday.

The National Nuclear Security Administration chose Triad National Security LLC as the winning bidder to manage Los Alamos National Laboratory, the birthplace of the atomic bomb. Comprised of Ohio-based Battelle Memorial Institute, Texas A&M University and the University of California, the team will begin taking over later this year.

The contract — worth an estimated $2.5 billion a year — marks a big step as federal officials look to get the lab back on track after safety lapses and missed goals.

The lab in recent years has mishandled plutonium and mistakenly shipped nuclear material to other federal facilities via a commercial cargo plane. It also inappropriately packaged waste that led to a radiation release and a nearly three-year closure of the nation's only underground nuclear waste repository.

Criticism of the lab's safety record has intensified as the federal government pushes to restart production of plutonium cores for the nation's nuclear weapons arsenal.

Following serious concerns about management more than a decade ago, the University of California formed a consortium with Bechtel and other private companies to become Los Alamos National Security LLC.

Problems persisted, however, and federal officials announced in 2015 that the contract wouldn't be renewed due to missed performance goals.

The National Nuclear Security Administration followed up in 2017 with a request for proposals that called for the would-be contractor to foster a "security conscious culture," something watchdog groups have said has been missing at the lab.

"The lab will continue to be a critical resource to ensure the future safety and security of the United States as we begin work on new endeavors, like the effort to recapitalize our plutonium pit mission," she said.

Gordon-Hagerty was referring to a recent recommendation by her agency that Los Alamos each year produce at least 30 plutonium cores — the triggers for nuclear warheads.

Production of the cores has been based at Los Alamos since the 1990s, although none have been turned out since 2011 because of safety problems and concerns about a lack of accountability.

At least 50 cores, also known as pits, will be produced each year at the U.S. Energy Department's Savanna River Site in South Carolina under the recommendations outlined in May.

The effort is worth hundreds of jobs and billions of dollars in federal funding that would be needed to either revamp existing buildings or construct new factories to support the work.

The National Nuclear Security Administration said Triad was "the best value" when all factors were considered and will provide future stability for up to 10 years if all contract options are exercised.

The contract is a boon for U.S. Energy Secretary Rick Perry's alma mater. Texas A&M regents who authorized pursuit of the deal include some of Perry's biggest political donors and his personal attorney.

In that statement, University of California and Texas A&M officials said they were committed to building on seven decades of world-class research and innovation at Los Alamos.

The National Nuclear Security Administration said Perry played no role in the evaluation or selection of Triad.

Asked about the lab's troubled history, the University of California's Office of the President said it could not provide any more information about the new management team's plans until the transition begins later this year.

The University of California has played a role in management since the lab's inception in the 1940s as part of the Manhattan Project.

Watchdog groups that have been critical of the safety lapses at the New Mexico lab were concerned about the University of California's continued role and political influence in that state.

Greg Mello with the Los Alamos Study Group questioned whether the universities, Battelle and the other companies will be able to keep clear lines of responsibility.