The local sheriff estimated the recovered whiskey was worth at least $100,000. 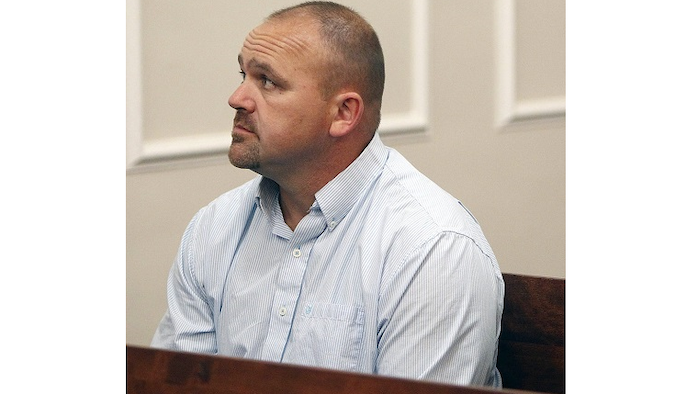 In a May 22, 2015 file photo, Gilbert "Toby" Curtsinger sits Franklin County Circuit Court in Frankfort, Ky. Curtsinger, the ringleader of a whiskey theft operation in Kentucky was sentenced to 15 years in prison Friday, June 1, 2018 for his role in siphoning tens of thousands of dollars' worth of bourbon from a pair of distilleries.
Michael Clevenger/Courier Journal via AP, File

The ringleader of a whiskey theft operation in Kentucky was sentenced to 15 years in prison Friday for his role in siphoning tens of thousands of dollars' worth of bourbon from a pair of distilleries.

Having secured a place in Kentucky lore as "Pappygate," the thefts included hard-to-get and pricey brands such as Pappy Van Winkle bourbon that were hauled under a tarp to potential buyers. The local sheriff estimated the recovered whiskey was worth at least $100,000.

The sentencing of former distillery worker Gilbert "Toby" Curtsinger on Friday means the celebrated case is close to winding down. Of the 10 people indicted after the scheme was uncovered in 2015, one case is still pending.

Curtsinger did not give a statement before being sentenced in Franklin County Circuit Court in Frankfort. The one-time Buffalo Trace distillery employee pleaded guilty last year to charges that included theft by unlawful taking and receiving stolen property.

Prosecutor Zachary Becker said Friday that the length of the prison sentence was "commensurate and appropriate" when considering Curtsinger's "level of involvement."

"Even though to some people it just might involve some brown liquor, ... it is part of our heritage," Becker said in an interview. "So it's something that many of us take very seriously."

Curtsinger is the only one sentenced in the scheme who will serve prison time, Becker said. The others were given probation. Several cooperated with prosecutors in the case against Curtsinger.

The 15-year sentence was the maximum under terms of the plea agreement, Becker said. Curtsinger had faced a potentially longer sentence before the plea deal.

Curtsinger's attorney, Whitney True Lawson, said her client was "thankful" the long-running case had come to a close.

"As you could imagine, this matter has caused great stress to Toby and his family," she said in a statement. "He is looking forward to having this matter behind him so that he may focus on time with his family once again."

She said she will consider filing a motion for shock probation at the "appropriate time."

The thefts included bourbon taken from the Buffalo Trace and Wild Turkey distilleries. Curtsinger, who worked on the Buffalo Trace loading docks, distributed the whiskey through a syndicate that included members of his recreational softball team, authorities said.

Curtsinger loaded whiskey barrels into a pickup truck, covered them with a tarp and hauled them to potential buyers while wearing a Buffalo Trace shirt, authorities said.

The scheme was exposed after the Franklin County sheriff's office received an anonymous tip that several missing Wild Turkey bourbon barrels were stashed on Curtsinger's property.

Armed with a search warrant, sheriff's officer found barrels containing bourbon behind an outbuilding on the property. The barrels had been sanded and spray-painted black on the tops and bottoms in what authorities believed was an effort to remove the distiller's marks.

Authorities said Curtsinger often relied on go-betweens to find customers, and the group often made connections through softball tournaments.

Investigators said they cracked not only whiskey thefts but a steroid-trafficking scheme as part of the investigation.

Once the criminal cases end, one big question still looms: what to do with the confiscated bourbon? Becker said Friday that he anticipates filing a motion later asking that the purloined spirits be disposed of "in a manner consistent with the wishes of the Van Winkle Family, Buffalo Trace and Wild Turkey." He didn't elaborate.