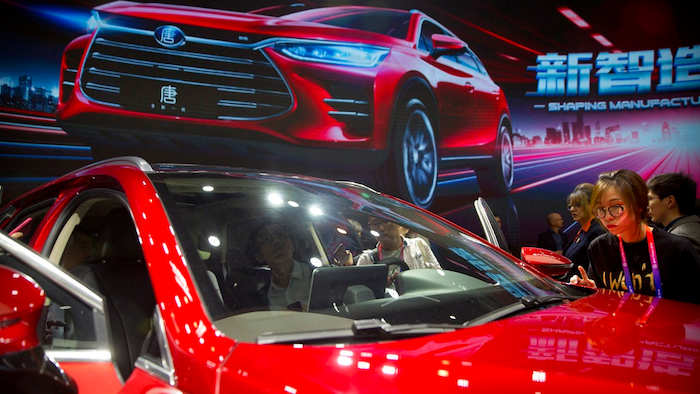 In this April 25, 2018, file photo, attendees look at the Tang SUV by Chinese automaker BYD after a press conference at the China Auto Show in Beijing. An industry group says Chinese passenger car sales expanded at a faster pace in April 2018 as growth in the world's biggest auto market picked up steam.
AP Photo/Mark Schiefelbein, File

Monthly figures from the China Association of Automobile Manufacturers show that passenger cars sales in April rose 11 percent over a year earlier to 1.9 million vehicles, outpacing a 3.5 percent growth rate in March.

Sales of "new-energy vehicles" such as electric cars and gasoline-electric hybrids more than doubled to 82,000.

The relaxed regulations came amid rising trade tensions between the U.S. and China that might dent U.S. auto imports — Ford vehicles are facing longer waits as Chinese customs agents tighten up inspections. The company said its China sales fell 26 percent in April to 69,503 vehicles.

The latest numbers are an improvement on uneven sales earlier this year and a lackluster performance last year as sales growth cooled following a surge in 2016 that was driven by tax cuts.

Automakers forecast total market growth for China this year of 3 to 4 percent, a fraction of earlier double-digit rates.