Associated Press
The floating nuclear power plant, the 'Akademik Lomonosov', is towed out of the St. Petersburg shipyard where it was constructed in St.Petersburg, Russia, Saturday, April 28, 2018. The Akademik Lomonosov is to be loaded with nuclear fuel in Murmansk, then towed to position in the Far East in 2019.
AP Photo/Dmitri Lovetsky

ST. PETERSBURG, Russia (AP) — A floating nuclear power plant built in Russia has embarked on its first sea voyage so its reactors can be loaded with fuel.

The floating plant, the Akademik Lomonosov, was towed on Saturday out of the St. Petersburg shipyard where it was constructed.

It is to be pulled through the Baltic Sea and around the northern tip of Norway to Murmansk in northwest Russia, where the nuclear reactors are to be fueled.

The Lomonosov is to be put into service in 2019 in the Arctic off the coast of Chukotka in the far east, providing power for a port town and for oil rigs.

The project has been widely criticized by environmentalists. Greenpeace has dubbed it a "floating Chernobyl." 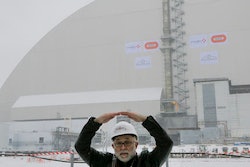 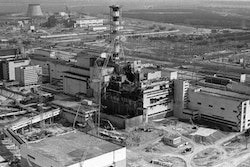