Ford Taurus, may you rest in peace at the salvage yard. 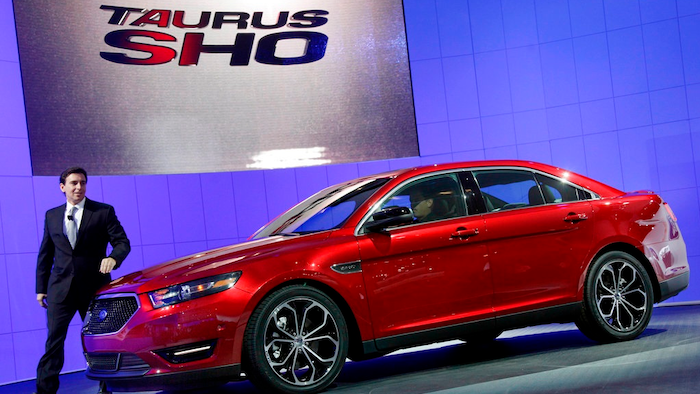 This April 20, 2011, file photo shows Mark Fields, executive vice president, Ford Motor Company, introducing the 2013 Ford Taurus SHO at the New York International Auto Show. In about a year, a car that once was the most popular in America will die for a second time. Ford Taurus, rest peacefully in heaven’s salvage yard. Blame the full-size sedan’s slow death on the national obsession with SUVs and Ford Motor Co.’s need to slash costs and remake itself for a new era of self-driving cars and shuttles. Ford announced the car’s demise on Wednesday, April 25, 2018, as part of major restructuring plan to focus capital spending on more popular SUVs and technology needed to morph into a mobility company.
AP Photo/Richard Drew, File

DETROIT (AP) — A car that once was America's top-seller is about to die — for a second time.

Ford Taurus, may you rest in peace at the salvage yard.

Blame the full-size sedan's slow demise on the national obsession with SUVs and Ford Motor Co.'s need to slash costs and remake itself for a new era of self-driving cars and shuttles.

Ford announced the car's passing this week as part of major restructuring plan aimed at focusing capital spending on more popular SUVs and technology needed to morph Ford into a mobility company.

The 114-year-old automaker said it would stop selling all car models in North America but two: the Mustang muscle car and a version of the compact Focus called Active. That means Ford's Chicago plant will stop making Tauruses next March. North American production of the Focus compact car and Fiesta subcompact will halt in May, while the midsize Fusion lives a few more years before it departs.

They'll be replaced by five new SUVs, all to deal with a market that has shifted dramatically in five years. Last month, trucks and SUVs were two-thirds of U.S. new vehicle sales. They were less than half in March of 2013.

"We will focus on products and markets where we know we can win," new CEO Jim Hackett said in making the announcement.

That means the end of the line for the Taurus, which was completely remade as a new car for a third time in the 2010 model year. The timing couldn't have been worse. It came out as high gas prices were sending families to more efficient midsize sedans like the Toyota Camry and Honda Accord. Then the SUV boom hit.

"It had everything going against it," said Karl Brauer, executive publisher for Kelley Blue Book and Autotrader.

The Taurus was built on heavy, older underpinnings, limiting Ford's ability to create more interior space or make the car more efficient, Brauer said. At the same time, midsize competitors used newer technology for better ride and handling and to expand inside space.

The latest Taurus did develop a bit of a cult following, though, especially the 365-horsepower turbocharged performance version called S.H.O. for "Super High Output."

"It's really a sad thing to see a good car like that go," mused Corey Aaron of Buford, Georgia, who owns a metallic gray 2013 S.H.O. that he loves because it can out-accelerate many other cars yet looks like a sleepy family sedan.

Aaron, a member of an S.H.O. enthusiast club, says Ford is short-sighted for getting rid of a car with a loyal following. Before the Taurus, Aaron bought only foreign-brand vehicles, which he considered to have better performance and quality.

"After getting behind the wheel, it totally changed my perspective on domestic manufacturers," he said.

The Taurus debuted in late 1985 at a time when Ford was in financial trouble and needed a big hit. The company had found that American tastes were changing away from big, boxy sedans to more nimble and efficient European cars.

So more than 1,000 Ford staffers came up with a sleek-looking, roomy car with a smooth ride that was efficient and handled like a smaller car. Derisively called a "flying potato" by a competitor, the Taurus was so futuristic that it became the template for all modern sedans.

By the 1990s, the cars were everywhere. The Taurus became the best-selling car in America in 1992 with sales of nearly 410,000, just as Japanese imports were starting to take hold. It kept the top spot for five years until being supplanted by the Toyota Camry in 1997.

Sales remained strong until the Taurus got a makeover in 1996. Although the second generation sold well, it never matched the original car's numbers.

In the late 1990s, Ford began focusing more on higher-profit trucks and SUVs and let the Taurus languish. The last one rolled off the assembly line in 2006. By then, Ford had sold over 7 million of them, many going to rental car companies toward the end.

Shortly after production stopped, Ford again was caught off-guard by spiking gas prices and had little to offer consumers. It got into financial trouble again before a new CEO came in. He realized the value of the Taurus brand, resurrected the name and relabeled what was then the Five Hundred sedan.

Don't be surprised if the Taurus name rises from the ashes again because it is well-recognized by consumers, said Robert Passikoff, president of Brand Keys Inc., a New York customer research firm. It could even be repurposed on a new SUV, but that vehicle will have to fill unmet needs for consumers, Passikoff said.

Ford won't give up rights to the Taurus name, which it still uses in China on a different car, spokeswoman Jennifer Flake said.

Asked if the name will reappear, she said, "You never know."