It is creating a new management structure to enable faster decision-making. 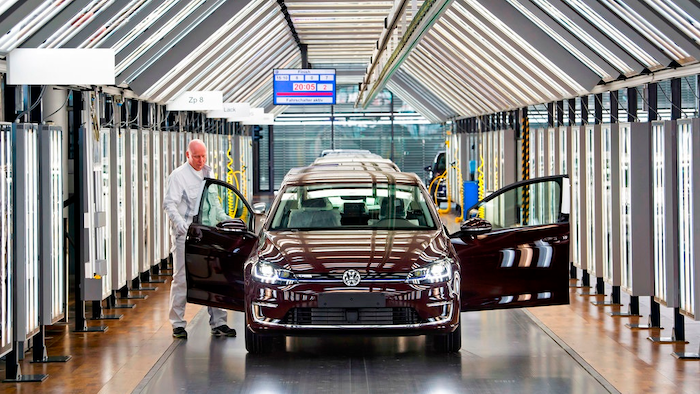 In this March 5, 2018 file photo Roland Schulz makes the final check of an e-Golf electric car in the so-called light tunnel in the German car manufacturer Volkswagen's Transparent Factory in Dresden, Germany . The supervisory board of the German car maker is convening Thursday, April 12, 2018 to discuss a new leadership structure.
AP Photo/Jens Meyer

The German automaker said in a statement that it would reorganize its management into six broad business areas plus China. It said the new structure would streamline decision-making in the individual operating units.

Diess, a former BMW executive, has had the difficult task of negotiating restructuring and cost-cutting with German worker representatives since becoming head of the Volkswagen brand in 2015.

Mueller, who formerly headed Porsche, took over as CEO unexpectedly in September 2015 when Martin Winterkorn resigned over the company's scandal over cars rigged to cheat on emissions tests. He led the Wolfsburg-based company through the aftermath of the scandal and turned in record sales and strong profits in 2017. The company sold 10.74 million vehicles and made 11.6 billion euros ($14.3 billion) in profit.

Board Chairman Hans Dieter Poetsch said Mueller, 64, had done "outstanding work" at a time when the company "faced the greatest challenge in its history."

Conventional carmakers such as Volkswagen are racing with industry outsiders such as Waymo and Uber to dominate new ways of getting around, such as autonomous taxis and car-sharing services in which people use vehicles only when they need them instead of owning. Volkswagen has set up a services company, Moia, and plants to turn out more battery-powered models.

The new structure will include three brand groups: volume products, premium and super premium. The company makes mass-market cars under the Volkswagen, SEAT and Skoda brands, luxury cars under the Audi nameplate and very high-priced vehicles under the Lamborghini and Bentley brands.

Its statement said the truck and bus division, the fourth business group, would be made ready for capital markets, a step that could include selling shares in the division. The company did not detail the fifth and sixth business divisions ahead of a news conference scheduled for 10:30 a.m. (0930 GMT) Friday.

Diess would not only head the management board, the top executive body at German companies that reports to the supervisory board, or board of directors. He would also have charge of vehicle development and research as well as vehicle-related information technology.

Diess was the subject of speculation as a possible successor to Winterkorn when he arrived at Volkswagen from BMW less than three months before Winterkorn's sudden departure left the company needing a new CEO in a hurry. The board of directors turned to longtime company employee Mueller, who started at Audi in 1978.

The company made other changes in top posts. It said the head of purchasing, Francisco Javier Garcia Sanz, was leaving at his own request and that his post would be filled on an acting basis by Volkswagen brand purchasing head Ralf Brandstaetter.

Human resources head Karlheinz Blessing is being replaced by Gunnar Kilian, until now an official with the company's works council, or employee representatives. Additionally, Porsche sports car division head Oliver Blume is being promoted to the top management body of the entire group.