The company, Natural Fruit, employed migrant Myanmar workers who claimed it had abused them and broke labor regulations. 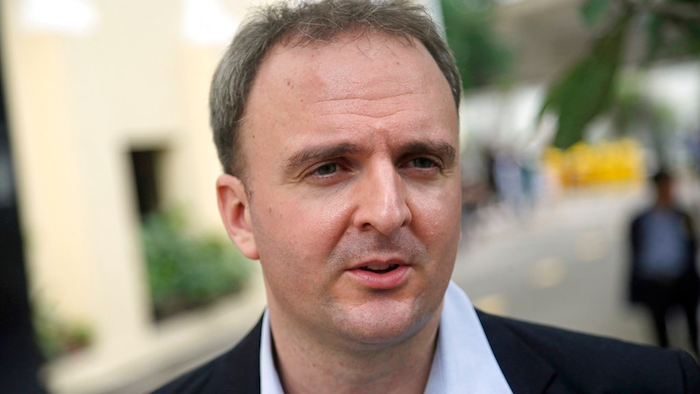 In this Nov. 3, 2016, file photo, British labor rights activist Andy Hall talks to reporters at the Supreme Court in Bangkok. A court in the Thai capital has ordered the activist to pay 10 million baht ($321,000) in damages to a company that filed a civil defamation suit after he helped expose alleged human rights violations at its factory. The Monday, March 26, 2018 ruling against Hall was just the latest development involving one of four defamation suits filed by pineapple canning company Natural Fruit, which employed migrant Myanmar workers who claimed the company had broken labor regulations in abusing them.
AP Photo/Sakchai Lalit, File

BANGKOK (AP) — A court in the Thai capital on Monday ordered a British labor rights activist to pay 10 million baht ($321,000) in damages to a company that filed a civil defamation suit after he helped expose alleged human rights violations at its factory.

Hall's legal troubles stem from a 2013 report he researched for the Finnish consumer organization Finnwatch that alleged labor abuses at Natural Fruit's facilities. They also concern an interview that he gave to Al-Jazeera on the subject, which was the focus of Monday's ruling. Natural Fruit claimed that the report Hall helped research and his interview comments both hurt their business.

Hall has prevailed in one of the two criminal defamation suits against him, while the other is pending, as is another civil suit. He has also filed a countersuit against Natural Fruit.

"This verdict is a major setback for rights of human rights defenders, migrant workers, labour/migration activists and researchers everywhere and casts a dark shadow over recent positive progress the Thai government and Thai industry has made to improve migrant worker conditions," Hall commented Monday on his Twitter account.

The reputation of Thai companies has been tainted in recent years by allegations of labor abuse, especially in the fishing and seafood industries. Several companies in that sector have worked with Hall to try to improve conditions, fearing sanctions from countries that take Thai exports.

"The big issue in Andy Hall's case is this is an active attempt to try and discourage independent research into company supply chains in Thailand, and this should be a serious concern to all foreign investors who are sourcing production in Thailand," said Phil Robertson, deputy Asia director of Human Rights Watch.