The Institute for Supply Management's PMI showed the strongest reading since May 2004. 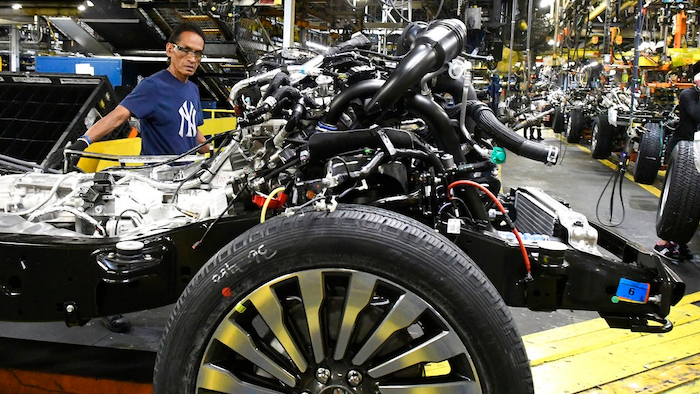 In this Oct. 27, 2017, photo, workers assemble Ford trucks at the Ford Kentucky Truck Plant in Louisville, Ky. On Thursday, March 1, 2018, The Institute for Supply Management, a trade group of purchasing managers, issues its index of manufacturing activity for February.
AP Photo/Timothy D. Easley

WASHINGTON (AP) — American manufacturers said they expanded in February at the fastest pace in nearly 14 years — gains driven in part by a jump in hiring.

The Institute for Supply Management, a trade group of purchasing managers, reported Thursday that its manufacturing index climbed to 60.8 in February from 59.1 in January. This was the strongest reading since May 2004. Any score above 50 signals growth.

The gains in the survey largely came from a surge in the employment and inventory components of the index. New orders and production expanded in February but at a slightly slower rate than in January.

Timothy Fiore, chair of ISM's manufacturing survey committee, said the results indicate that some companies were slow to hire as demand had increased in prior months, meaning that activity could be stepped up for the first half of the year.

"We've got a couple of months of demand that production has to satisfy on an accelerated basis," Fiore said.

Fiore said he sees the expansion as being helped by the "super juice" of the recent tax cuts for companies that President Donald Trump signed into law.

Jennifer Lee, a senior economist at BMO Capital Markets, said she is "cautiously optimistic" about manufacturers continuing to grow at such a strong rate. Demand appears to be solid, but manufacturers are coping with a limited inventory of supplies and skilled workers.

Among 18 manufacturing industries, 15 reported growth last month, including electronic products and transportation equipment. Only the apparel and furniture sectors said that activity had contracted.

Manufacturers are seeing high costs for raw materials, as the pricing component of the index reached its highest level since May 2011. The survey noted price increases for steel and aluminum in particular, a critical factor as Trump is expected on Thursday to meet with steel and aluminum executives to discuss tariffs that could further cause metal prices to rise.

Prices for steel and plastic have climbed in part due to the hits to production from hurricanes that struck in Texas and Florida last year. Steel costs are higher in part now that the rebuilding process is beginning after the storms struck.

U.S. manufacturing has expanded for the past 18 months. Solid economic growth around the world and a weaker dollar — which helps exports — have fueled the gains during much of that period.