'Pharma Bro' Begs for Leniancy: 'I Was a Fool'

Martin Shkreli, best known for boosting the price of a life-saving drug, said "I still believe that I am a good person." 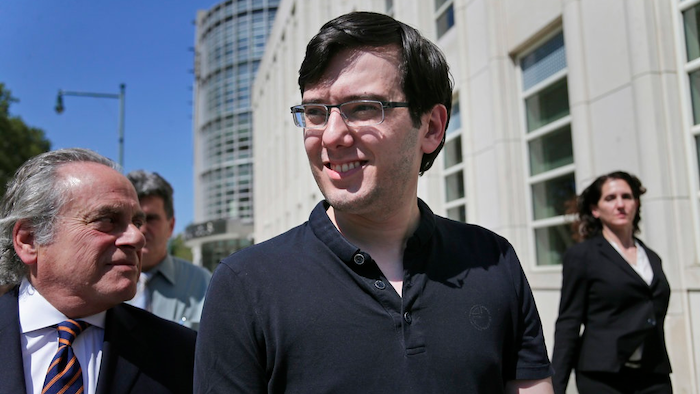 In this Aug. 4, 2017 file photo, Martin Shkreli, center, leaves federal court in New York. A judge has ruled that "Pharma Bro" Martin Shkreli was responsible for nearly $10.5 million in losses in his securities fraud case. The amount set on Monday by Judge Kiyo Matsumoto could result in a harsher punishment for Shkreli at his March 9 sentencing.
AP Photo/Seth Wenig, File

NEW YORK (AP) — "Pharma Bro" Martin Shkreli admitted that he was "very far from blameless" in a letter to a judge asking for leniency, according to court filings.

"I was wrong, I was a fool. I should have known better," Shkreli wrote in his letter to Brooklyn federal court Judge Kiyo Matsumoto.

"I accept the fact that I made serious mistakes, but I still believe that I am a good person with much potential," Shkreli said.

The brash former pharmaceuticals company CEO was convicted in August of cheating investors in two failed hedge funds. He remains in jail and faces up to 20 years in prison when he is sentenced March 9.

Shkreli, 34, is perhaps best known for boosting the price of a life-saving drug.

He was out on bail during his trial but was jailed when the judge decided he had made veiled online threats against Democrat Hillary Clinton.

"I have learned a harsh lesson. The trial and six months in a maximum security prison has been a frightening wake-up call. I now understand how I need to change."

Earlier this week, the judge ruled that Shkreli was responsible for nearly $10.5 million in losses in the securities fraud scheme, a decision that could result in a harsher punishment.

".... if you find it appropriate to impose a sentence that does not include an extended period of incarceration, I will do my absolute best to use my skills and whatever talents I have been blessed with for the betterment of humanity," Shkreli writes.