Ghosn agreed to take a pay cut of 30 percent. 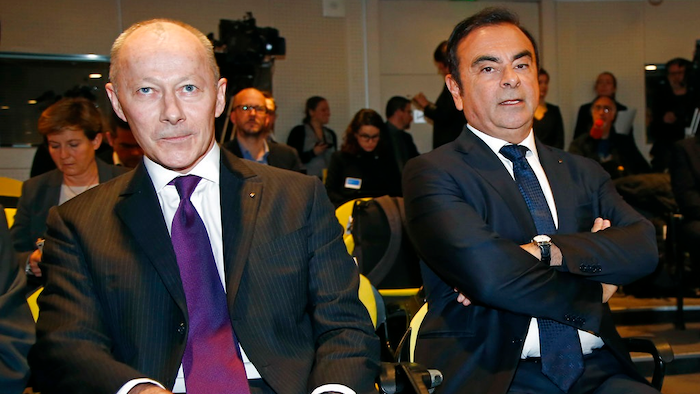 French car maker Renault CEO Carlos Ghosn, right, and his new deputy Thierry Bollore pose for photographers before the presentation of the company 2017 at the headquarters in Boulogne-Billancourt, outside Paris, Friday Feb. 16, 2018. French carmaker Renault says it had record profit and sales last year, boosting its shares and CEO Carlos Ghosn's bid to keep his job.
AP Photo/Michel Euler

Renault's board cited the company's "exceptional results" in recommending that shareholders renew Ghosn's term after his mandate expires in June. Ghosn has been the face and driving force for the alliance among Renault, Nissan and Mitsubishi that claimed to be the world's biggest car-seller in 2017.

Renault confirmed to the AP comments by French Finance Minister Bruno Lemaire that Ghosn agreed to take a pay cut of 30 percent. The French government owns a 15.1 percent stake in the car maker.

Ghosn said he didn't think Nissan's Japanese management would agree to French government demands for a closer alliance with Nissan.

He named Thierry Bollore in a new deputy post, seen as a potential successor. Ghosn, 63, has headed Renault since 2005.