The EPA initially proposed a fine nearly nine times larger — or $4.9 million — for just one incident. 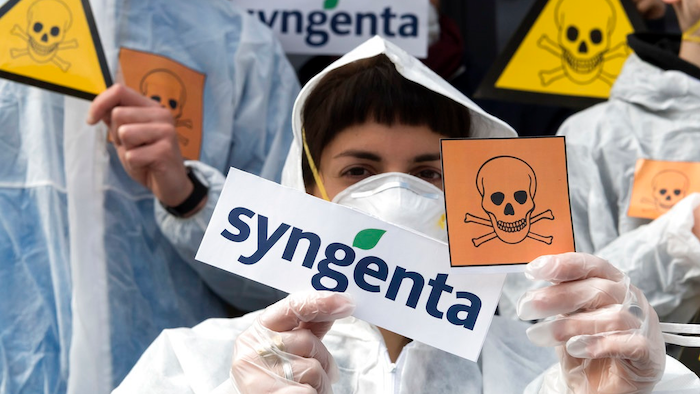 In this April 6, 2017, file photo, activists of the Basel political action committee "March against Monsanto and Syngenta" protest in front of the Syngenta headquarters against the acquisition of Syngenta by the Chinese company ChemChina, in Basel, Switzerland. After a February 2018 announcement, critics are blasting the U.S. Environmental Protection Agency for dramatically lowering a fine on agribusiness company Syngenta for violations of pesticide regulations.
Georgios Kefalas/Keystone via AP, File

Syngenta, under a settlement announced this week, will pay $150,000 for improperly using the pesticide chlorpyrifos at a seed corn field in Hawaii in 2016 and 2017. It will also spend at least $400,000 to train farmers, particularly small-scale growers, in pesticide use.

The EPA initially proposed a fine nearly nine times larger — or $4.9 million — for just one incident. This amount was proposed in December 2016, under the Obama administration.

Syngenta "got off with a ridiculously small fine," said Paul Achitoff, managing attorney for mid-Pacific office of Earthjustice, an environmental law organization.

He said that the EPA often asks for the maximum penalty when it files a complaint and then lowers the amount for the fine that is ultimately imposed. But, in this case, he said "there's such a huge difference."

He also said the EPA and Syngenta were close to resolving the case for a larger amount in 2016, when President Barack Obama was in office. But he said Syngenta pulled back after the 2016 election, figuring they could pay less under the Trump administration.

"And now a year and a half later, we see that they're absolutely right. They could get a much better deal under Trump," Achitoff said.

Achitoff declined to say how he knew the EPA and Syngenta were close to reaching a deal before Trump's election, saying he didn't want to compromise his sources.

Syngenta did not answer when asked by email if the company was close to a deal in 2016 and then decided to wait, betting the fine would be lower with Trump in office.

The company said in a statement: "Agricultural worker safety is a top priority for Syngenta and safe use training has for many years been an integral part of the way the company does business worldwide."

Dean Higuchi, a spokesman for the EPA in Honolulu, defended the settlement as the largest of its kind in the U.S., said the fine sends a strong message to potential violators and will also protect farmworkers by providing training.

First developed by Dow Chemical in the 1960s, chlorpyrifos is among the most widely used pesticides in the world and is commonly sprayed on citrus fruits, apples, cherries and other crops.

In March, EPA Administrator Scott Pruitt reversed an Obama-era effort to bar the use of chlorpyrifos on fruits and vegetables after several peer-reviewed academic studies found that even tiny levels of exposure could hinder the development of children's brains.

The first pesticide use violation occurred in January 2016 at Syngenta Seeds' crop research farm on Kauai where workers entered a recently sprayed field.

Syngenta failed to tell the workers to avoid the fields, and then allowed them to enter the fields without protective gear. The EPA said Syngenta also failed to provide adequate decontamination supplies at the farm and supply prompt transportation for emergency medical care.

The incident happened when a state agriculture inspector was at the farm. She documented the violations and referred the case to the EPA, which resulted in the initial complaint filed in 2016.

The EPA, in an amended complaint filed this month, said Syngenta again violated pesticide use rules in January 2017 when a worker applied chlorpyrifos but failed to inform work crews about the treated areas and when they should avoid those fields.

A worker called the EPA the same day to report he believed he had been exposed to pesticides and was experiencing "adverse health effects" as a result. The complaint didn't include details about his health problems.

Lori Ann Burd, a spokeswoman for the advocacy group Center for Biological Diversity, said the lower fine is "a win for the pesticide maker, not the farmworkers carelessly exposed to a dangerous pesticide."

"This absurdly low fine just reassures pesticide makers what they already knew, that as long as Trump is president they're free to do whatever they want," Burd said.

Scott Enright, the chairman of the Hawaii Board of Agriculture, said his department was encouraged that the settlement includes "substantial" training in farm pesticide safety. He said the department hopes to work with Syngenta to develop training materials and programs that may benefit all Hawaii farms.

JoAnn Yukimura, a Kauai County Council member and former Kauai mayor, said she hopes requiring Syngenta to pay over a half-million dollars for the violations will prevent future incidents.

She said a law Kauai passed in 2013 requiring large farms to create buffer zones around their crops and to disclose what pesticides they use has raised awareness of the issue, even though federal courts invalidated the measure.

"I hope that the direction we're moving in will continue," she said.

Syngenta, which is based in Switzerland, was purchased last year by China National Chemical Corp., a state-owned company also called ChemChina.

Syngenta Settles for $1.5B