For now, the economy remains on firm footing, even with the prospect of somewhat higher inflation.

Christopher RugaberJosh Boak
In this Monday, Jan. 22, 2018 file photo, a for sale sign is displayed in front of a home in Mount Lebanon, Pa. Economists are generally bullish in their outlooks for 2018: Most expect the new U.S. tax cuts, a sturdier global economy and a healthy job market to support consumer and business spending and a steady if modest pace of hiring. And many Americans appear confident enough to buy homes: Sales of existing houses reached their highest level in 11 years in 2017.
AP Photo/Gene J. Puskar, File

WASHINGTON (AP) — A wave of fear about inflation and higher interest rates has sent stock prices tumbling and raised concerns about corporate profits. On Monday, a plunge of over 1,100 points in the Dow Jones industrial average capped two days of losses that have erased the stock market's gains for the year.

Yet the rush of anxiety has obscured a fundamental fact about the U.S. economy: It's healthy.

Nearly nine years into the expansion that followed the Great Recession, the job market is strong. So is housing. Consumer confidence is solid, and manufacturing is rebounding. Households and businesses are spending freely. Personal debt has lightened since the financial crisis a decade ago. And major economies around the world are growing in tandem.

After Monday's stock market swoon, Sarah Huckabee Sanders, the spokeswoman for President Donald Trump, who has frequently boasted about the stock market's gains under his watch, said in a statement:

That very economic vigor, in fact, is a key reason why investors anticipate higher inflation and interest rates. Higher borrowing rates over time could undercut corporate earnings as well as stock prices. And some fear that the Federal Reserve might miscalculate and raise rates too high or too fast.

But no one is sure that will happen. And for now, the economy remains on firm footing, even with the prospect of somewhat higher inflation. The inflation concerns escalated after Friday's monthly U.S. jobs report showed that average wages surged 2.9 percent in January from 12 months earlier — the sharpest year-over-year gain since the recession.

"What we're seeing right now is an economy overall that is doing quite well and has strong fundamentals," said Gregory Daco, chief U.S. economist at Oxford Economics. "The economy remains on track to expand at a fairly solid pace, and along with that comes inflation."

Here are some key reasons why the economy remains robust despite the jitters on Wall Street:

JOBS AND WAGES ARE PICKING UP

The job market is in its best shape in a decade or more. Businesses continue to hire at a pace that could drive the unemployment rate — already at a 17-year low of 4.1 percent — even lower. Some economists think the jobless rate by year's end could reach 3.5 percent, which would be the lowest level in a half-century.

With relatively few job seekers, many businesses are struggling to fill open positions. To attract and keep workers, many are finally offering higher pay, which helps explain why the January jobs report showed such a sharp pickup in wages. A separate measure of wages and salaries rose in the final three months of 2017 by the most in nearly three years.

With more solid job security and rising pay in some industries, Americans as a whole are growing more optimistic about the economy's direction. And their confidence has fueled consumer spending, the primary fuel of the U.S economy. In the final three months of 2017, consumer spending rose at its fastest pace in a year-and-a-half.

Their willingness to spend has led many to make big purchases, too: Sales of existing homes in 2017 reached their highest level in 11 years. The demand for housing helped accelerate home construction last year to its fastest annual pace in a decade.

Businesses, too, are buying more computers, machinery and other equipment. Such purchases increased faster in the second half of last year than in any six-month period since 2014. Companies typically accelerate their investments when they foresee an improving economy.

"This not only points to stronger demand today but also says that firms are becoming increasingly confident about the future," said Paul Mortimer-Lee, an economist at BNP Paribas.

Americans generally haven't been running up heavy debts. U.S. household debt — everything from mortgages and credit card debt to student and auto loans — equaled 95 percent of disposable income in the July-September quarter, according to data from the Fed. That compares with about 120 percent right before the recession.

Still, their willingness to spend has raised one concern: Savings have fallen. In December, the nation's savings rate fell to its lowest level since 2005. Over the long run, a low savings rate can diminish the ability of households to withstand a financial shock.

The U.S. economy now has something supporting it that it hasn't had for nearly a decade: Solid growth around the world. Roughly 120 countries experienced faster growth in 2017 than in 2016, according to the International Monetary Fund. That's the most since 2010.

The 19 European nations that share the euro expanded 2.5 percent in 2017, the most in 10 years and faster than the United States, which grew 2.3 percent. Japan's economy has expanded for seven straight quarters, the longest such stretch since 2001. All that global growth tends to benefit the U.S. economy, the world's largest.

Even good economic news can prompt some troubling concerns. As companies raise pay, they typically increase prices to help cover their extra costs. That cycle can speed inflation. The Fed is then likely to raise the key short-term rate it controls to help reduce borrowing and spending and hold inflation in check.

Fed officials have indicated that they expect to raise rates three times this year. But after Friday's robust report on jobs and wages, some economists think the Fed might accelerate its rate hikes. Economists at BNP Paribas and Macroeconomic Advisers now forecast four rate increases this year.

A key source of anxiety among some investors is that the Fed or other central banks might end up tightening credit so much or so fast as to trigger an economic downturn.

There are also the wild cards of a possible government shutdown, President Donald Trump's efforts to restrict global trade and the potential sour investor reaction if the federal budget deficit tops $1 trillion next year because of tax cuts and increased funding for the military and disaster relief, among other expenses. 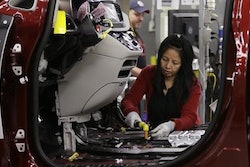 Wages, Benefits Up in Q4 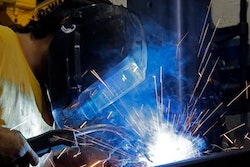