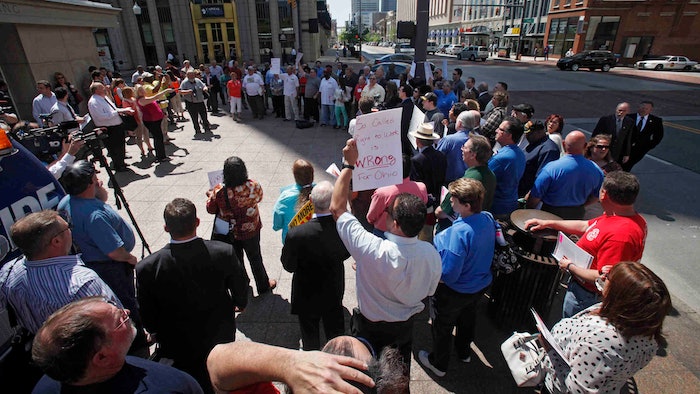 This Wednesday, May 1, 2013 file photo shows the AFL-CIO protesting proposed Right to Work Legislation on the South East corner of the Statehouse in Columbus, Ohio. A handful of states in the Midwest now surrounded by neighbors with so-called right-to-work laws are facing new efforts aimed at changing their labor laws. In Ohio, a pair of Republican lawmakers wants to put the issue before voters in two years. Missouri's new right-to-work law will go to a statewide referendum in November.
Tom Dodge, The Columbus Dispatch via AP, File

TOLEDO, Ohio (AP) — Hemmed in by a growing number of states that block mandatory union fees in workplaces, holdout states in the Midwest are facing renewed attempts to enact so-called right-to-work laws.

Missouri's new law will go to a statewide referendum in November, while a pair of Republican lawmakers in Ohio announced last month they want to put the issue before voters in two years.

With many of their neighboring states — some with deep ties to organized labor — already adopting right-to-work laws, the question is whether unions and their Democratic supporters will able to stop the next domino from falling.

Right-to-Work laws guarantee that no person can be compelled to join or not join a labor union.

It wasn't long ago that Indiana became the first Rust Belt state to enact right-to-work in 2012. Nearby states including Michigan, Wisconsin, West Virginia and Kentucky followed — leaving Ohio, Illinois and Missouri nearly surrounded.

Right-to-work backers in those three remaining states contend they're now at a disadvantage and in danger of being left behind because they believe the laws make nearby states more business friendly and attract jobs.

"My fear is that if we don't do this, we will see states like Indiana and Michigan pull away," said Rep. Craig Riedel, an Ohio Republican who wants the GOP-controlled the legislature to put six right-to-work amendments on the 2020 ballot.

Waiting until then, he said, will give their side time to explain the details and show how they're different from proposed collective bargaining restrictions that failed overwhelmingly in a statewide vote in 2011. Ohio's Republican Gov. John Kasich, who has said right-to-work isn't a priority, also will be out of office by then.

Union leaders in the state who contend that right-to-work rules mean lower wages and less protection for workers already have started pushing back, putting up billboards around Ohio.

Economists and labor researchers say it's difficult to determine the true impact of such laws because dozens of other factors influence where companies decide to locate, such as energy costs and access to transportation.

"The evidence is slim that it helps," said Roland Zullo, a labor relations professor at the University of Michigan. "It's being sold as a way to improve the economy, but the real agenda is to undermine the power of labor unions."

Still, advocates for right-to-work in the Rust Belt are quick to point to nearby states like Kentucky, where the head of an aluminum company that announced plans last spring to build a $1.3 billion plant there said it would've gone elsewhere if it hadn't become a right-to-work state earlier in the year.

"The fact we're surrounded by right-to-work states is very meaningful to Illinois' economic future," said Todd Maisch, president of the Illinois Chamber of Commerce. "It doesn't mean we have to have it to be competitive, but we've got to do something."

Few companies are willing to say the lack of right-to-work plays a role in their decision, Maisch said, but he believes it was a reason why Toyota and Mazda chose Alabama last month instead of Illinois for its new $1.6 billion joint venture plant.

Among the three states without right-to-work in the industrial Midwest, Illinois is the least likely to change because Democrats have a tight grip on its legislature.

"The dominant factor in terms of right-to-work is who has control of state government," said labor researcher Jake Rosenfeld, a professor at Washington University in St. Louis. "That has been play book that's worked."

Republicans in Missouri made right-to-work a priority after winning the governor's office, but unions put a stop to the new law by collecting enough signatures to get a public vote.

In Ohio, Republicans control the state's elected offices, but some party leaders are hesitant to take on labor again after the collective bargaining defeat just over six years ago.

But backers think they can be successful this time by convincing voters that Ohio is losing out to neighboring states.

AFL-CIO Ohio president Tim Burga said he and other union leaders are preparing for a fight.

"We won't be caught by surprised that there are these extreme legislators that want to drive these anti-worker proposals," he said. "This will be met with great opposition."