Oklahoma state representative Mark McBride claims someone connected to the wind industry put a tracking device on his truck. 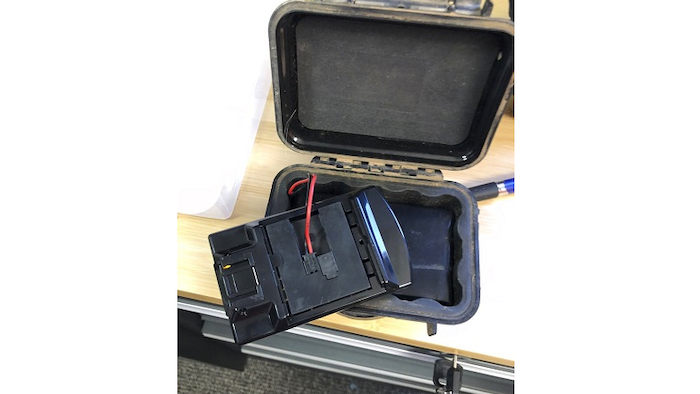 This December 2017 photo shows what Oklahoma state Rep. Mark McBride, R-Moore, says is a tracking device that he removed from his truck in Oklahoma. McBride wants to know who put the contraption there and is one of at least five Oklahoma state lawmakers who in recent months asked a prosecutor to investigate claims they have been followed or threatened.
Mark McBride via AP

OKLAHOMA CITY (AP) — The head of an Oklahoma wind power trade group on Thursday flatly denied a state lawmaker's suggestion to police that someone connected to the industry put a tracking device on his truck to spy on him.

The Oklahoma State Bureau of Investigation and Oklahoma County District Attorney David Prater are investigating after McBride found the device Dec 4. When police arrived to investigate, McBride suggested someone connected to the wind industry may have been spying on him. He said he was writing legislation that could negatively affect wind farms.

McBride called the discovery unsettling and said he stopped hanging out with some of his friends because of it. He has filed a lawsuit seeking to identify whoever is responsible for placing the device on his truck.

Prater said four other GOP legislators approached him last year with concerns they were being followed, but no charges have been filed in connection with those reports. Whether a case rises to the level of criminal charges depends on a number of factors, including why someone is tracking or following a legislator, he said.

In 2014, Prater pursued blackmail and computer crimes charges against a tea party activist who sent an intimidating email to a state senator. The activist was found guilty and fined, but the conviction was later thrown out on appeal.