India-based company made a commitment earlier this year to hire 10,000 American workers. 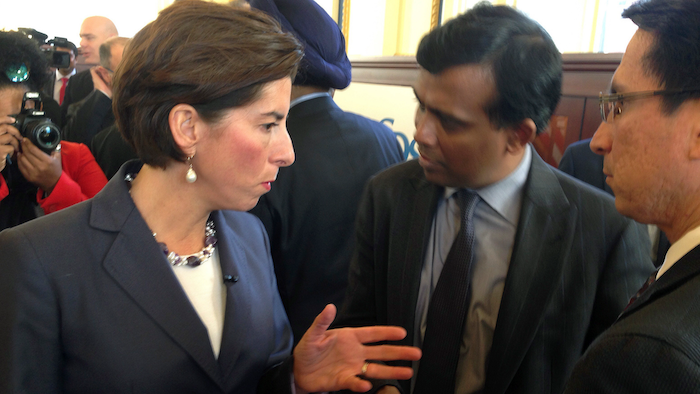 PROVIDENCE, R.I. (AP) — Information technology outsourcing firm Infosys is opening a design and innovation hub in Rhode Island and plans to add 500 jobs in the state in the next five years, company and state officials announced on Monday.

Democratic Gov. Gina Raimondo and Infosys President Ravi Kumar celebrated with a news conference in Providence, where the hub is planned. It's the third of at least four planned Infosys hubs in the U.S. as part of a commitment the Bangalore, India-based company made earlier this year to hire 10,000 American workers.

State officials said Infosys is eligible for an estimated $10 million in various state incentives and the average annual salary of the jobs in the state would be $79,000.

"Five hundred good-paying jobs, well above the average salaries in Rhode Island," Raimondo said. "Good-paying, family-supporting jobs. I have a feeling there's much more in store. They're starting with 500, but it's on us to make sure they fall in love with Rhode Island."

Raimondo said jobs would be at every level, with and without a college degree.

Kumar said the company chose Rhode Island because of factors including its academic ecosystem and design focus, location near many of its clients in the northeast and economic incentives.

One of the world's most prestigious design schools, the Rhode Island School of Design, is located in Providence, but Kumar also cited the state's community college network and the University of Rhode Island and Brown University.

"Digital design is one of the most high-demand skills in the market," Kumar said.

He added that those skills are lacking in the United States and said Infosys plans to train workers to develop them through "a finishing school." Among the steps the company will take is to hire design students who are oriented to physical objects and train them with digital skills, Kumar said.

"We create talent pools which don't exist today," he said.

President Donald Trump has blasted an American visa program that tech companies have heavily relied upon to temporarily bring in workers from other countries at lower wages. Asked about that criticism and changes in federal immigration policy under the Republican president, Kumar said the program to train Americans and put workers closer to clients has been in the works for the last two years.

"You have to be closer to clients," he said. "When you design a digital experience, you cannot design in isolation. You have to design and co-create along with your clients."

The company already has 300 to 400 employees in Rhode Island, many of whom work with Citizens Bank, but Kumar said the 500 workers would be in addition to those and focused on design.

Infosys previously announced its first two hubs, focused on technology and innovation, will be located in Indiana and North Carolina. Kumar on Monday said the company is continuing to evaluate locations for the next hub but could eventually establish five.

The results are in: E-Commerce for Manufacturing 101 is a hit. View it on demand now to learn how to measure ecommerce success and how to make it work, even if you're a one-person marketing department. Watch it now.
Nov 30th, 2021