The country's factories are struggling4 to keep up with demand for cars, electronic components and manufacturing equipment. 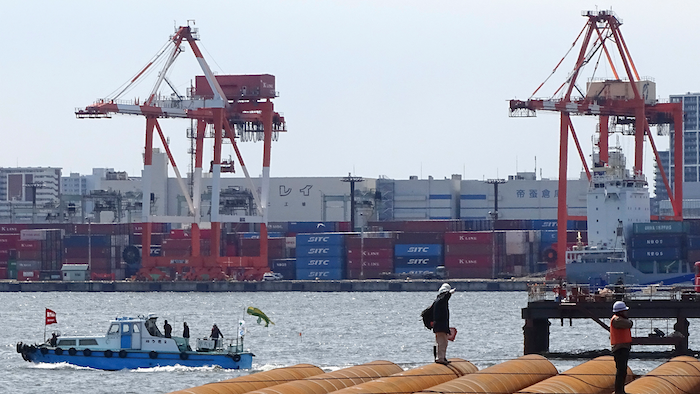 In this March 24, 2017, photo, workers stand at a seaside construction site with the pier of a container terminal in the background in Tokyo. Japan's trade surplus fell more than 40 percent in October from a year earlier, despite strong growth in exports to China, the U.S. and the EU, as costs for imports of oil, gas and coal surged. Customs figures released Monday, Nov. 20, 2017, showed imports rose almost 19 percent from the same month a year earlier in October to 6.41 trillion yen ($57 billion) while exports were up 14 percent at 6.7 trillion yen ($59 billion).
AP Photo/Eugene Hoshiko

TOKYO (AP) — Japan's exports grew 14 percent over a year earlier in October on strong demand for vehicles, electronics and machinery. However, customs data released Monday showed even faster growth in imports of oil, gas and coal that caused the trade surplus to fall more than 40 percent from the year before.

As China recovers momentum following a slowdown, demand from the region's biggest economy is helping to breathe fresh life into its neighbors' economies.

Exports are helping to drive a moderate recovery in Japan, the world's third-largest economy, as its factories struggle to keep up with demand for cars, electronic components and manufacturing equipment.

Imports of crude oil, gas, coal and other fuels surged 37.5 percent from a year earlier to 1.24 trillion yen ($11 billion). Rising prices and the weakening of the Japanese yen over the past year contributed to that increase.

"Looking ahead, the export climate index remains elevated and suggests that export growth will continue at a similar pace as the 6.4 percent year-on-year increase recorded last quarter," Marcel Thieliant of Capital Economics said in a commentary.

But the economies of Japan's major trading partners are likely to slow in the next year, he said. "We therefore we expect real export growth to slow from 6 percent year-on-year this year to 3 percent in 2018."