CEO John Flannery is expected to lay out a significant retooling of the U.S. conglomerate. 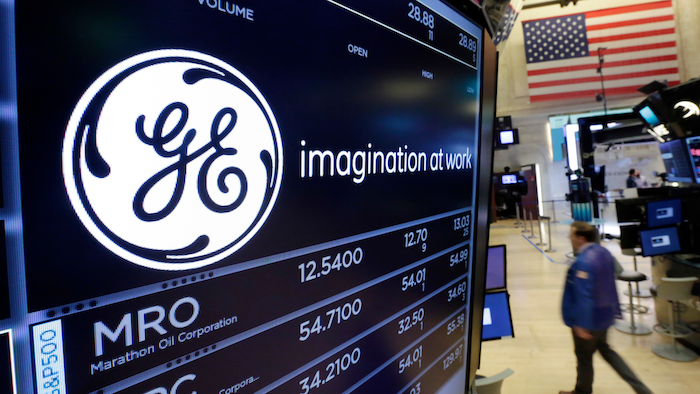 In this Monday, June 12, 2017, file photo, the General Electric logo appears above a trading post on the floor of the New York Stock Exchange. GE said Monday, Nov. 13, 2017, that it is slashing its quarterly dividend in half with investors gathering in Boston, where Chairman and CEO John Flannery is expected to lay out significant changes for the U.S. company.
AP Photo/Richard Drew, File

BOSTON (AP) — General Electric slashed its dividend in half as investors gathering in Boston, where Chairman and CEO John Flannery is expected to lay out a significant retooling of the U.S. conglomerate.

GE's quarterly dividend is being cut to 12 cents per share, from 24 cents, starting next month, the company said Monday.

Flannery says cost-cutting maneuver is part of the measures GE will undertake to make the company simpler and stronger. General Electric Co. is expected to announce further plans, including a potential reshaping of the company's health, aviation, lighting and transportation units.

Last month Flannery, who became CEO in August, said that GE would shed business units worth more than $20 billion over the next year or two. It has been paring businesses for well over a decade now.

After reporting disappointing third-quarter results in October, Flannery said that aside from the exit from certain businesses, GE was planning major cost cuts across the board. The company has already surpassed its goal of cutting $1 billion in industrial costs this year. It plans more than $2 billion in cuts next year, double the original target, to go with at least $20 billion in divestments over the next year or two, the executive said.

GE to Split into 3 Companies