Wildfires Cause $1B in Damage 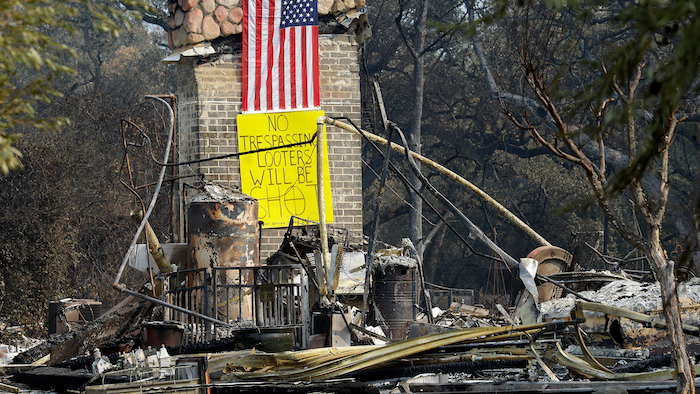 A sign on the chimney of a home warns looters Wednesday, Oct. 18, 2017, after it was destroyed by wildfires in Glen Ellen, Calif. California fire officials have reported significant progress on containing wildfires that have ravaged parts of Northern California.
AP Photo/Ben Margot

SAN FRANCISCO (AP) — The wildfires that have devastated Northern California this month caused at least $1 billion in damage to insured property, officials said Thursday, as authorities increased the count of homes and other buildings destroyed to nearly 7,000.

Both numbers were expected to rise as crews continued assessing areas scorched by the blazes that killed 42 people, a total that makes it the deadliest series of fires in state history.

State Insurance Commissioner Dave Jones said the preliminary dollar valuation of losses came from claims filed with the eight largest insurance companies in the affected areas and did not include uninsured property.

The loss total was expected to climb "probably dramatically so," Jones told reporters, making it likely the fires also would become the costliest in California's history.

The initial insurance total covered 4,177 partial residential losses, 5,449 total residential losses, 35 rental and condominium losses, 601 commercial property losses, more than 3,000 vehicle losses, 150 farm or agricultural equipment losses, and 39 boats. Those figures included some fire losses in Southern California — several dozen structures were destroyed or damaged in an Orange County fire — though most were from the northern part of the state, agency officials said.

The California Department of Forestry and Fire Protection's estimate of homes and structures destroyed was boosted to 6,900 from 5,700 as fire crews returned to hard-hit neighborhoods and assessed remote and rural areas they could not get to earlier, spokesman Daniel Berlant said.

He said most of the newly counted destroyed buildings burned on Oct. 8 and Oct. 9 — when the wildfires broke out in wine country north of San Francisco and other nearby areas.

Twenty-two of the 42 deaths in California's October fires happened in a Sonoma County wildfire, making it the third-deadliest in California history. A 1933 Los Angeles fire that killed 29 people was the deadliest, followed by the 1991 Oakland Hills fire killed 25.

When adjusted for inflation, the Oakland Hills fire is believed the costliest fire in California history at $2.8 billion. It destroyed about half as many homes and other buildings as the current series of fires.

The order extends the state's prohibition on price gouging during emergencies until April 2018 and expedites hiring of personnel for emergency and recovery operations.

In Los Angeles County, authorities said a charred body was found on Mount Wilson, where crews were trying to surround a smoldering wildfire in steep terrain.

The male body discovered late Wednesday was recovered by the coroner's office, which will try to identify it, Sheriff's Sgt. Vincent Plair said.

California firefighters were also battling a blaze that sent smoke billowing into the college beach town of Santa Cruz.

The wildfire in steep and rugged terrain had grown to nearly half a square mile (1.3 square kilometers) and the number of houses threatened by the fire had doubled to 300.