Australia is Out of the Car Making Business

The country's final automotive plant is closing, and 900 people are out of a job. 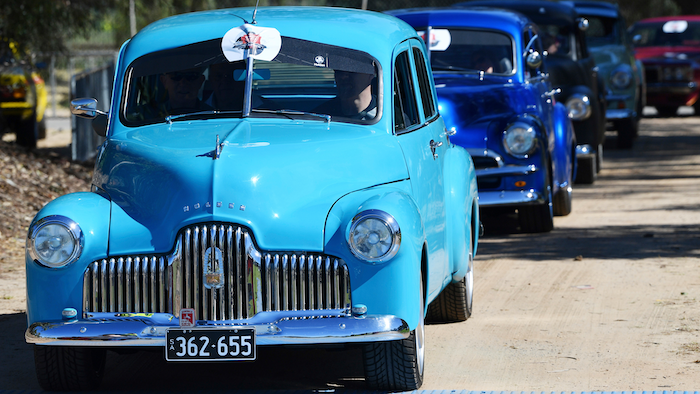 In this Oct. 15, 2017, historic Holden cars parade through the streets of Adelaide, Australia. The Australian auto manufacturing era ends after more than 90 years on Friday, Oct. 20, 2017 when General Motors Co.'s last Holden sedan rolls off the production line in the industrial city of Adelaide. The nation has already begun mourning the demise of a home-grown industry in an increasing crowded and changing global car market.
David Mariuz/AAP Image/ via AP

CANBERRA, Australia (AP) — The Australian auto manufacturing era is about to end after more than 90 years when General Motors Co.'s last Holden sedan rolls off the production line in the industrial city of Adelaide on Friday.

The nation has already begun mourning the demise of a home-grown industry in an increasing crowded and changing global car market.

GM Holden Ltd. is the last of an array of carmakers that once included Ford, Toyota, Nissan, Mitsubishi, Chrysler and Leyland to abandon Australia in recent decades.

With the Holden plant's shutdown after the last red Holden VF Commodore, a six-cylinder rear-wheel drive sedan, leaves its doors, 900 factory workers will clock off the last time.

Technical manager Peter Allison had been employed at the Holden factory for 19 years and had once expected to stay there for the rest of his working life.

"If we're not Holden fans, we're cars fans. Building cars is what we love," Allison said.

Thousands of jobs in businesses that have supplied components and accessories to Australian auto manufacturers are also at risk.

Though it's a subsidiary of a U.S. automotive giant, Holden is an iconic Australian brand and has been a source of national pride for generations.

The name came from English immigrant James Alexander Holden, who arrived in Adelaide as a 17-year-old in 1852 and set up a saddlery business.

The family business evolved from horses and buggies when the automobile age arrived. In 1931 GM bought what was then called Holden's Motor Body Builders. Such was the brand recognition that the Detroit headquarters decided to keep the Holden name.

The first mass-production model of the brand that became known as "Australia's own car," the FX Holden, was built in 1948. A decade later, more than half the new cars registered in Australia were Holdens. The market was built on a reputation for cars engineered for rugged Australian conditions.

The reasons behind the demise of Australian auto manufacturing are numerous.

The first Holden cars were built in an era of high Australian tariffs and preferential trade with former colonial master Britain, which encouraged global carmakers to set up local factories to increase market share.

There were exports, including the V8 Holden Commodore that has sold in the United States since 2013 as the Chevrolet SS.

A decade of surplus federal budgets ended in Australia in 2008 with the global economic crisis. Car industry subsidies have since weighed heavily on the burgeoning budget deficits.

Holden, Ford and Toyota — the final three carmakers — announced their departures in 2013 when a mining boom made the Australian dollar for the first time stronger than the greenback. That made Australian-made cars increasingly uncompetitive.

Prime Minister Malcom Turnbull said a lack of government support was not to blame since the government had provided a total of 7 billion Australian dollars ($5.5 billion) in subsidies to the industry since 2001.

"The manufacturers who have progressively closed their operations in Australia have made it clear it's not because of a failure of government subsidies," Turnbull said when Toyota closed its doors earlier this month.

Ford shut its Melbourne and Geelong plants a year ago after 91 years of Australian operations.