U.S. sales of new cars and trucks fell 7 percent to 1.4 million in July, the biggest percentage drop so far this year. 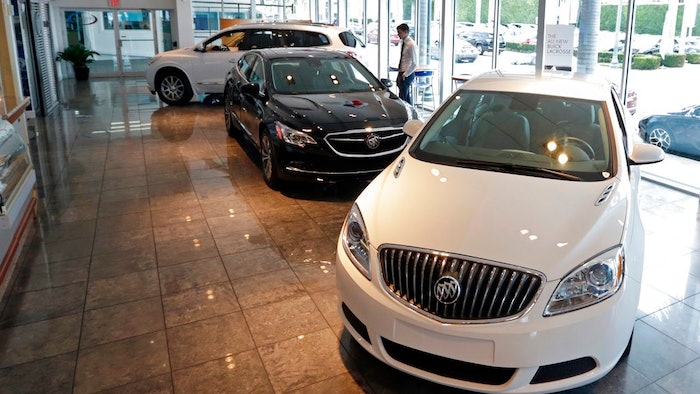 In this Wednesday, April 26, 2017, photo, 2017 Buick automobiles appear on display in the showroom at a GMC Buick dealership in Miami. U.S. sales of new cars and trucks showed another decline in July 2017 as consumers pulled back on purchases and waited for Labor Day deals. July marked the seventh straight month of declines in a peaking market.
AP Photo/Alan Diaz

U.S. sales of new cars and trucks fell 7 percent to 1.4 million in July, according to Autodata Corp. It was the seventh straight month of lower sales, and the biggest percentage drop so far this year.

July is often a slower month as buyers vacation and wait for dealers to offer model year clearance events in August and September. This year, big cuts in sales to rental car fleets and commercial customers were also a factor. Hyundai, for example, cut its fleet sales by 77 percent in July.

Mark LaNeve, Ford Motor Co.'s U.S. sales chief, said automakers have been preparing for lower U.S. sales this year. He doesn't see July as an acceleration of the downward trend. He said GM's decision to cut sales to low-profit rental car fleets by 81 percent — or 11,200 vehicles — was a big factor. Ford also cut fleet sales by 26 percent, and had to stop sales of its Transit commercial van for a few weeks while it performed a recall.

Automakers continue to see healthy profits thanks to consumers' preference for SUVs. Car shopping site Edmunds.com said the average price paid for a new vehicle in July was $34,558, 2 percent higher than the same month a year ago. GM said sales of its recently updated GMC Acadia SUV jumped 30 percent, while sales of Toyota's RAV4 SUV rose 36 percent to 41,804, a monthly record.

But car sales are plummeting, hurt by low gas prices and changing tastes. Sales of the Ford Fusion midsize sedan dropped 42 percent, while sales of the Chevrolet Spark subcompact fell a whopping 82 percent.

Automakers ramped up deals in July, a trend that's expected to continue for the rest of the summer as carmakers make way for 2018 models on their lots. Average interest rates on new-vehicle loans fell to a six-month low of 4.77 percent in July as more brands offered zero-percent financing deals, Edmunds said. Toyota was offering zero-percent financing for 72 months on a 2017 Toyota Camry sedan as the 2018 Camry arrived in dealerships.

Gutierrez said buyers can expect incentives to creep up by $200 or so per car in August and September.

— Volkswagen brand sales fell 5.8 percent to 27,091 as dealers sold off older Tiguan SUVs and started getting 2018 models on their lots.