Deadline Passes with No Decision on Steel Tariffs

There are trade-offs from taxing foreign steel that include higher prices for consumers and manufacturers that rely on steel, as well as strained relationships with trade partners. 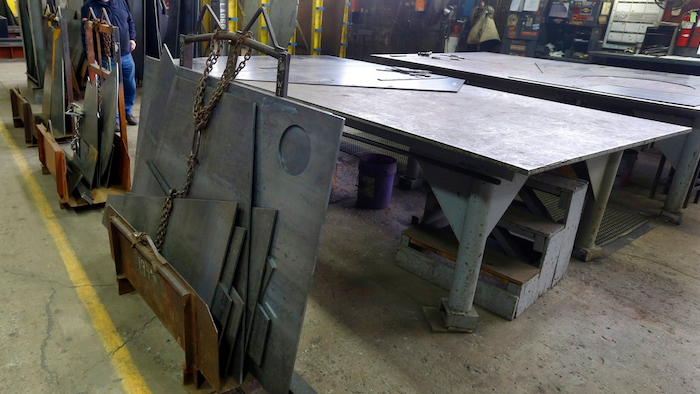 In this photo taken Feb. 12, 2015, cut panels of steel used to make blades to build fans for industrial ventilation systems are stored on the production floor in Harmony, Pa. President Donald Trump pledged during the campaign to help U.S. factory workers by slapping tariffs on foreign steel, but his long-awaited decision on the issue is running behind schedule.
AP Photo/Keith Srakocic

WASHINGTON (AP) — President Donald Trump pledged during the campaign to help U.S. factory workers by slapping tariffs on foreign steel. But his long-awaited decision on the issue is running behind schedule and administration officials are leaving plenty of wiggle room on what direction he'll take.

Commerce Secretary Wilbur Ross initially hoped to finish a report on tariffs last month, but his department has been holding off as the Pentagon weighs in about impact of steel tariffs on national security. The delay is an example of the difficulty Trump faces in delivering on his ambitious policy agenda — on taxes, health insurance and more — as quickly as he told voters he could.

White House officials have hinted that tariffs still are coming. Asked on "Fox News Sunday" over the weekend if the president planned to impose sanctions on foreign steel, White House chief of staff Reince Priebus responded: "My guess is that he will because he promised he would."

There are trade-offs from taxing foreign steel that include higher prices for consumers and manufacturers that rely on steel, as well as strained relationships with trade partners. The possible risks became more apparent last week at the summit of the 20 leading rich and developing nations in Germany. The summit ended with a declaration that governments would develop "concrete policy solutions that reduce steel excess capacity" by November 2017, but the U.S. position was aggressive enough that there were concerns about a potential trade war.

Supporters of the tariffs say the move would help crack down on excess steelmaking by China. Opponents say it would raise prices for consumers and manufacturers that turn steel into cars, furniture and other products.

Scott Paul, president of the Alliance for American Manufacturing, supports higher steel tariffs but notes that the initial timeline set by the administration was "very ambitious." He says that tariffs could help domestic steel mills while encouraging other countries to take similar moves against China.

Paul said that some officials and advocacy groups have slowed the process to fine-tune the policy, while others are hoping that a slower pace of discussions will derail the debate. He said he trusts that "at the conclusion of the process, there will be a well thought-out rationale for whatever relief is provided."

In April, Trump asked the Commerce Department to launch an investigation into whether foreign steel imports posed a threat to national security, on the grounds that the American military relies on steel for airplanes, ships and other equipment. Steel also goes into roads, bridges and other critical infrastructure.

The investigation reflects the administration's determination to use existing trade laws more aggressively to combat what it sees as unfair practices by U.S. trading partners. Restricting steel imports, it reasoned, would help restore U.S. manufacturing jobs and reduce an American trade deficit that came in at $502 billion last year.

But the Pentagon is also providing its own input on the issue while the Commerce Department's report has yet to be finalized.

To critics, the administration's national security case against steel imports looks shaky. The American military does not appear critically dependent on steel imports. The U.S. produces 70 percent of the steel it consumes. And just 3 percent of steel shipments go to national defense or homeland security, according to the American Iron and Steel Institute.

Many of the steel industry's troubles can be traced to low prices resulting from massive overproduction by China, which churns out nearly half the world's steel. But the United States has already put up big barriers to Chinese steel imports. So any restrictions or tariffs on steel would land elsewhere — on U.S. ally Canada (which supplies 17 percent of U.S. steel imports), Brazil (13 percent) and South Korea (12 percent).

"If we were to impose tariffs and quotas because of the Chinese problems, but we really hit our friends and allies — then how does all this advance our interests?" says Amanda DeBusk, head of the international trade department at the law firm of Hughes Hubbard & Reed.

Then there are America's steel-consuming industries, such as automakers and equipment manufacturers. They say they would be hurt if sanctions drove up steel prices. Daniel Pearson, senior fellow at the libertarian Cato Institute, says steel mills employ just 140,000 workers — a fraction of the 6.5 million who work for manufacturers that consume steel.

"In an attempt to protect the U.S. steel industry, many more American jobs will inadvertently be lost," Speyer said.