"You want to leave a job better than you got it. But working-class people in general — we're not doing good," said Chuck Jones, retiring president of USW Local 1999. 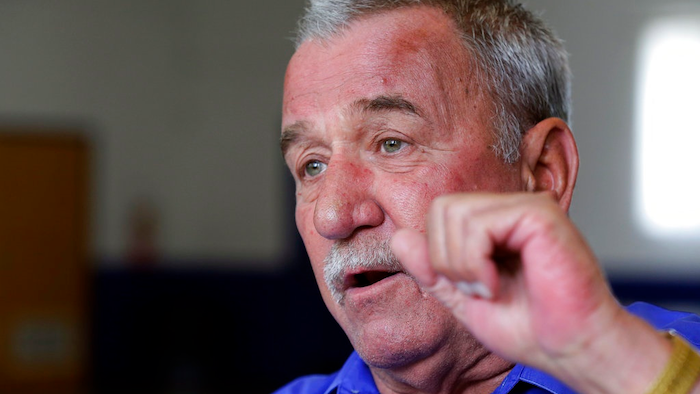 In this Wednesday, June 7, 2017 photo, United Steel Workers local 1999 union president Chuck Jones gestures during an interview in Indianapolis. Jones grabbed headlines in December after he publicly accused then-President-elect Donald Trump of lying about how many jobs he was saving in a deal with furnace and air conditioner maker Carrier Corp.
AP Photo/Michael Conroy

INDIANAPOLIS (AP) — When Chuck Jones joined the United Steel Workers, unions flexed their power to strike and crossing a picket line could be met with brute force.

That's now a distant memory, says the retiring president of USW Local 1999, who grabbed headlines in December after he publicly accused then-President-elect Donald Trump of lying about how many jobs he was saving in a deal with furnace and air conditioner maker Carrier Corp.

Like unions across the U.S., the Indianapolis local, which represents workers from Carrier and bearing manufacturer Rexnord Corp., has shed members as factories downsized or shuttered. Many are moving to Mexico, where labor is cheaper.

"You want to leave a job better than you got it. But working-class people in general — we're not doing good," said Jones, 65, whose thick, gray mustache, artful use of profanity and ever-present cigarette wedged between his fingers give him the appearance of union boss straight from central casting.

Jones became a steel worker straight out of high school in 1969 during a high tide of the U.S. labor movement that helped propel a generation of blue-collar workers into the middle class. He says his retirement at the beginning of June was "bittersweet" after decades of declining fortunes for working people.

Elected as the local's vice president in 1985, just before the union went on strike, Jones at one point could command workers to shut down their machines if labor issues weren't resolved. He was made president in 1996, two years after President Bill Clinton finalized the North American Free Trade Agreement, which led to a big increase in trade among the U.S., Mexico and Canada, but also encouraged U.S. manufacturers to relocate operations to Mexico to take advantage of cheap labor there. Jones' union has also been affected by changes in Indiana that made it easier to replace striking workers and by passage of a right-to-work law that made union membership optional.

"I used to have a little bit of power," Jones said. "Now the story is completely different. First off, the guy is going to say, '(Expletive) you, I ain't shutting nothing down.'"

In recent years, contract negotiations have been aimed at trying to give up as few benefits as possible while making sure wages keep pace with inflation. Helplessness has set in, he says.

Last year Carrier, its parent company United Technologies, and Rexnord all announced plans to shut down at least part of their Indiana operations. All told, about 1,700 jobs are expected to be cut, including about 850 union workers at Carrier and Rexnord.

"If they woulda come to us and said, 'Hey, you guys are making too much money, we need you to work with us on being more competitive,' could we have got there? I don't know. But we sure as hell would have tried," said Jones, who feels that people have unjustly blamed unions as uncompetitive. "Neither company came to us."

"What happened with Carrier and what happened with Rexnord and what is happening around the country isn't because the workers didn't keep their end of the deal," Donnelly said. "Chuck and his team, they basically got thrown under the bus."

Rexnord issued a statement standing by the relocation of its Indianapolis operations, saying "difficult decisions are a part of today's business environment."

As for Carrier, the workers' plight drew the attention of Trump, who brokered a deal with the company, setting the stage for a moment of fleeting glory for Jones as he prepared to retire.

During a hyped-up announcement at its Indianapolis factory, Trump inaccurately said that 1,100 jobs would be saved. The number was closer to 800.

Jones wasn't having it and told reporters Trump had lied about the numbers. Trump attacked the union boss on Twitter for doing a "terrible job representing workers" while suggesting that "if United Steelworkers 1999 was any good, they would have kept those jobs in Indiana."

In the frenzy that followed, Jones received flowers as well as hate mail. He still stands behind his words, but allows that he could have "toned it down."

"How (Trump) feels about me, I could care less," Jones said. He went on to add that it's not that he's tough, using another expletive, "because I'm not. I'm an old man. But I've been around here some 30 odd years. I've had people threaten to burn my house down. People threaten to shoot me when I leave."

At his retirement party, gifts included a carton of cigarettes, booze — and a framed image of Trump, featuring his tweets about Jones.

Now Jones plans to spend more time with his 13 grandchildren. He's also contemplating a run for local office, though he won't say which one.

"If I could help people out, especially working people, I'd consider it."