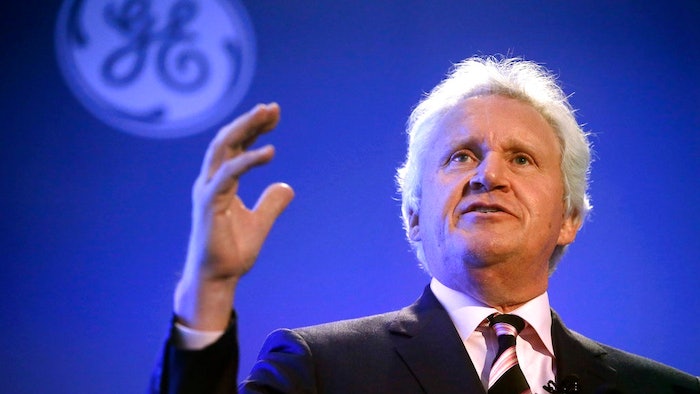 In this Monday, April 4, 2016, file photo, General Electric CEO Jeff Immelt speaks during a news conference in Boston, held to unveil more details about GE's move to the city, pledging to spend $50 million on a series of initiatives in Boston. General Electric announced Monday, June 12, 2017, that Immelt is stepping down after 16 years as CEO of the iconic conglomerate. Immelt took the helm in 2001 from legendary CEO Jack Welsh. John Flannery, president and CEO of the GE’s health care unit, will take over as CEO in August 2017.
AP Photo/Steven Senne, File

NEW YORK (AP) — General Electric's Jeff Immelt is stepping down after 16 years as CEO of the iconic conglomerate, having succeeded in repositioning the company as a producer of large industrial products but failing to fully revive its lagging stock price.

John Flannery, president and CEO of the GE's health care unit, will take over as CEO in August, the company said Monday.

Immelt took the helm in 2001 from legendary CEO Jack Welch. After the financial crisis, he sharply pared down the financial services business that Welch had built up and went on a spending spree to acquire businesses in the power and oil and gas sectors. During his tenure Immelt also disposed of GE's appliance unit and the NBC television business.

The 61-year-old Immelt will stay on as chairman until his retirement from the position at the end of the year, with the 55-year-old Flannery stepping into the role after that.

Recent reports say GE is considering selling the lighting business, which could fetch about $500 million.

While GE credits Immelt with improving its financial performance and its focus, GE's stock price has trailed the market with him as CEO.

Analyst Robert McCarthy at Stifel Nicolaus wrote in a note to clients that the timing of the change in leadership was "unsurprising since the serial underperformance of the stock." GE said the moves were part of its succession plan.

Immelt spent the second half of his time as CEO returning the company to its less-risky industrial roots. In 2007, GE's finance arm accounted for about 55 percent of its profits, but its large exposure to commercial real estate left it vulnerable during the financial crisis.

Immelt instead focused on products like energy-generating windmills, gas turbines for power plants, online medical records and energy saving equipment for electrical grids as a source of new profits.

GE made big acquisitions under Immelt to bring new business and technologies to GE. The company acquired the power business of France's Alstom three years ago. GE on Monday received U.S. antitrust approval to combine its oil and gas operations with Baker Hughes, potentially creating an oil services powerhouse with more than $32 billion in revenue. The approval is conditioned on GE selling its Water and Process Technologies business.

GE also remains one of the world's biggest producers of jet engines.

Flannery is a longtime General Electric executive, starting his career at GE Capital in 1987. He became president and CEO of the company's equity unit in 2002 and eventually joined the health care division in 2014, focusing on advanced technologies.