The system is vital for operating the station's solar panels, radiators and robotic equipment. 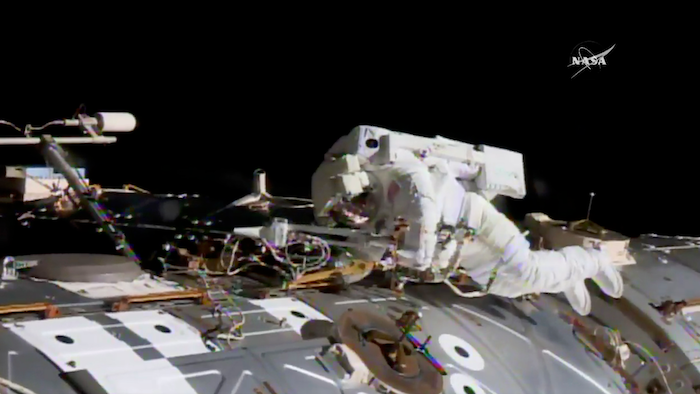 In this NASA provided frame from video, NASA astronaut Jack Fischer works to install antennas at the International Space Station while astronaut Peggy Whitson, not pictured, works on repairs Tuesday, May 23, 2017.
NASA via AP

The 250-mile-high (400-kilometer-high) replacement job fell to commander Peggy Whitson, the world's most experienced female astronaut. She now ties the record for most spacewalks by an American — 10.

Even though a second relay box managed the data load just fine after Saturday's breakdown, NASA scrambled to put together a spacewalk in order to restore backup capability. The system is vital for operating the station's solar panels, radiators and robotic equipment.

The failed data-relay unit — recently refurbished with upgraded software — was just installed in March. Hauling out a spare, Whitson photographed the faulty device to help engineers figure out what went wrong. Then she quickly removed it and bolted down the spare, an identical 50-pound (22-kilogram) box measuring 14 by 8 by 13 inches (35-20-33 centimeters) — officially known as an MDM or multiplexer-demultiplexer. But when Whitson discovered some metal flecks on some of the bolt holes, she had to pull the spare box back out.

Whitson and Fischer were just out spacewalking on May 12. That excursion was cut short by leaking station equipment, leaving two antenna installations undone. So Fischer completed the chore Tuesday.

Altogether, Tuesday's spacewalk was expected to last no more than a few hours — exceedingly short by NASA standards.

"Here we go again," French astronaut Thomas Pesquet said via Twitter as his U.S. colleagues suited up for the spacewalk. As they ventured outside, Pesquet cautioned, "You guys be safe."

It was only the second spacewalk for Fischer, a rookie astronaut who arrived at the orbiting lab last month.

"What's more awesome than being on @Space_Station? Getting a call from mission control 4 another spacewalk! Dancing w/ the cosmos," he said in a tweet.

After he had installed the antennas, Fischer radioed, "Oh my gosh, it's so beautiful," as the station sailed out over the tip of South America and over the South Atlantic.

Whitson is more than halfway through a 9 ½-month mission. Currently on her third spaceflight, she's spent more time off the planet than any other American and, at age 57, is the oldest woman to ever fly in space. Tuesday's excursion put her in third place on the all-time spacewalking list, behind a Russian and fellow American with more hours out in the vacuum.

The space station also is home to two Russians.