The number of applications for unemployment benefits have now come in below 300,000 for 114 straight weeks, the longest such streak since 1970. 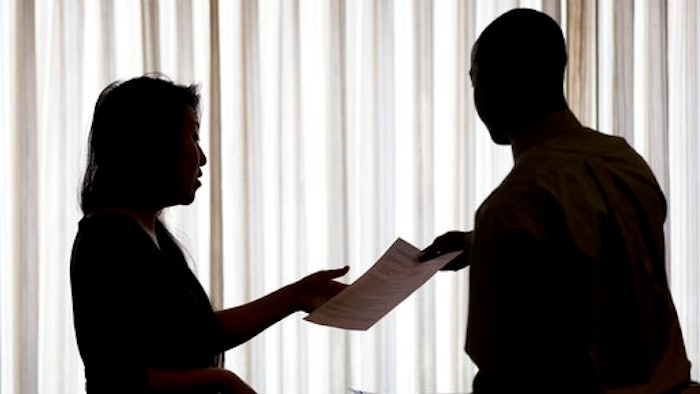 In this June 23, 2014, file photo, a recruiter, at left, takes the resume of an applicant during a job fair, in Philadelphia. On Thursday, May 11, 2017, the Labor Department reports on the number of people who applied for unemployment benefits the week before.
AP Photo/Matt Rourke, File

THE NUMBERS: The Labor Department said Thursday that initial claims for jobless aid fell by 2,000 to 236,000. The less volatile four-week average blipped up by 500 to 243,500. The overall number of Americans collecting unemployment checks dropped to 1.92 million, lowest since November 1988.

THE TAKEAWAY: Applications for unemployment benefits are a proxy for layoffs. They have now come in below 300,000 for 114 straight weeks, the longest such streak since 1970.

KEY DRIVERS: The numbers reflect the strength of the job market and show that most American workers enjoy job security. The government reported last week that the unemployment rate fell to 4.4 percent last month, lowest since 2007.

The job market looks healthier than the overall economy so far this year. The U.S. economy grew at an annual pace of just 0.7 percent from January through March, weakest performance in three years. Economists expect the pace of growth to quicken the rest of the year, led by a pickup in consumer spending.