Toyota to Invest $1.3B in Plant

The retooling will sustain the existing 8,200 jobs at Toyota's largest plant.

LOUISVILLE, Ky. (AP) — Toyota said Monday it is investing $1.3 billion to retool its sprawling factory in Georgetown, Kentucky, where the company's flagship Camry sedans are built.

No new factory jobs are being added, but Toyota says the upgrades amount to the biggest single investment ever at one of its existing plants in the United States. The retooling also will sustain the existing 8,200 jobs at Toyota's largest plant, where nearly one-fourth of all Toyota vehicles produced in North America are made, the automaker said.

"This major overhaul will enable the plant to stay flexible and competitive, further cementing our presence in Kentucky," said Wil James, president of the plant, which also assembles the Avalon and the Lexus ES 350.

The updates at the Kentucky plant are part of Toyota's plans to invest $10 billion in the United States over the next five years, said CEO Jim Lentz of Toyota Motor North America, in a news release.

Toyota is gearing up for production of the revamped 2018 Camry featuring a new exterior design, an upgraded interior and a new engine. The plant recently added more than 700 workers to support the launch of the 2018 Camry.

"The (production) line itself is being retooled to accommodate this change," Toyota spokesman Scott Vazin said.

Toyota is betting that the changes will solidify Camry's position as the top-selling vehicle in the U.S. that isn't a pickup truck. That dominance is under threat from the popularity of SUVs.

The automaker said the plans also call for updating equipment to streamline the production process and for construction of a new paint shop.

The investment follows the automaker's decision in 2013 to spend $530 million in the sprawling plant to begin building the luxury Lexus ES 350 in Kentucky.

State and local officials planned to attend an event later Monday at the Georgetown plant to celebrate the automaker's investment. 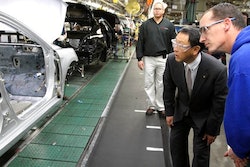 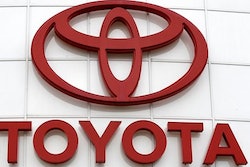