They will investigate and prosecute employers that overlook qualified American workers for the jobs. 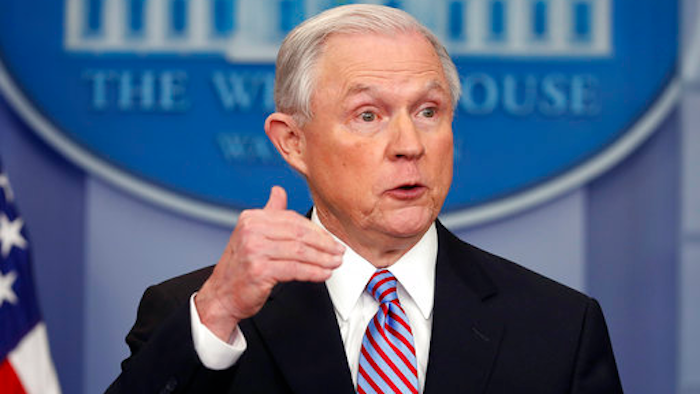 In this March 27, 2017, file photo, Attorney General Jeff Sessions speaks in the Brady Press Briefing Room of the White House in Washington. The Trump administration issued a stern warning to U.S. companies as they began applying for coveted skilled-worker visas Monday, cautioning that it would investigate and prosecute employers that overlook qualified American workers for the jobs.
AP Photo/Pablo Martinez Monsivais, File

WASHINGTON (AP) — The Trump administration issued a stern warning to U.S. companies as they began applying for coveted skilled-worker visas Monday, cautioning that it would investigate and prosecute employers that overlook qualified American workers for the jobs.

The message came on the opening day of applications for American employers seeking visas known as H-1B, which are used mostly by technology companies to bring in programmers and other specialized workers from other countries.

"U.S. workers should not be placed in a disfavored status, and the department is wholeheartedly committed to investigating and vigorously prosecuting these claims," Tom Wheeler, acting head of the Justice Department's Civil Rights Division, said in a statement.

The Obama administration sued companies for violating the Immigration and Nationality Act's anti-discrimination provisions, including businesses that favored foreigners over U.S. workers. But Monday's warning in a news release at the start of the visa process appeared to be a first-of-its kind signal to employers not to put American workers at a disadvantage.

U.S. Citizenship and Immigration Services also announced that it would step up its reviews of employers that use H-1B visas, saying "too many American workers who are qualified, willing and deserving to work in these fields have been ignored or unfairly disadvantaged."

The statements were the latest indication that even legal immigration will be scrutinized under the Trump administration.

While enforcement of visa abuses is not new, the aggressive position on the H-1B program is a different approach. White House spokesman Sean Spicer also addressed the issue at the beginning of his daily press briefing, saying the administration will crack down on businesses that discriminate against U.S. workers by using the visa program to hire foreigners.

Yet, the crackdown comes as no surprise. President Donald Trump promised to "end forever the use of the H-1B as a cheap labor program." A draft proposal circulated in January promised to review existing regulations, find ways to allocate visas more efficiently and ensure that beneficiaries are "the best and the brightest."

Trump has yet to issue that order; the enforcement effort announced Monday could be an interim measure while a broader overhaul is worked out.

The H-1B program is open to a broad range of occupations, including architects, professors and even fashion models. Companies must affirm that the job requires a specialty skill that cannot be filled by a U.S. worker, but critics say safeguards are weak. They argue the program routinely lets in foreign workers with minimal skills, even though these visas are supposed to be reserved for highly specialized jobs that are difficult to fill with U.S. workers.

The tech industry insists the H1-B program is vital. Proponents say the program encourages students to stay in the U.S. after getting their degrees in high-tech specialties. He said many of them go on to start companies and hire U.S. workers.

Critics called the announcement and increased enforcement a step toward reform.

"While the laws/regs are chock full of major loopholes, the U.S. government hasn't vigorously enforced them," longtime critic Ron Hira, a Howard University professor, said in an email. "I suspect that many H-1B dependent firms are not complying with good faith recruiting promises. DHS investigations would help shed light on this."

The crackdown didn't surprise the Computing Technology Industry Association, a trade group that represents Apple, Google, Microsoft and other major companies. Critics say that many of the available H-1B spots go to lower-paid foreign workers employed by consulting firms that let U.S. companies contract out their tech departments.

"If it helps preserve the program and frees up more spots for truly exceptional people to continue innovation in this country, then it's a good thing," said Todd Thibodeaux, the association's CEO. "And if it squeezes out people out at the bottom, then so be it."