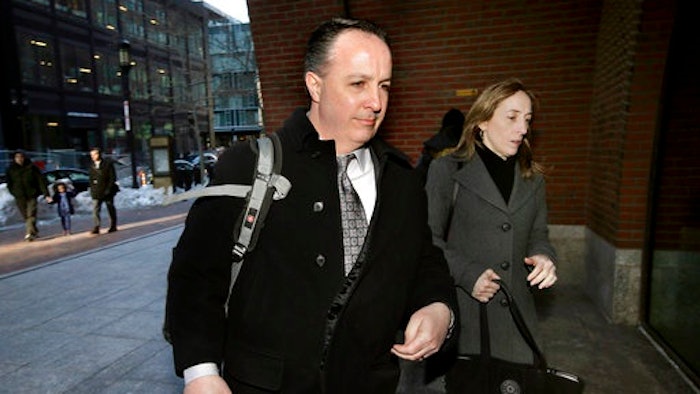 Barry Cadden, center, arrives at the federal courthouse, Thursday, March 16, 2017, in Boston, before scheduled closing arguments in his trial. Cadden, a former pharmacy executive and the president of New England Compounding Center, is charged with causing the deaths in 2012 of 25 people who received tainted steroids manufactured by the pharmacy.
AP Photo/Steven Senne

BOSTON (AP) — Was it murder or a tragic public health outbreak?

Prosecutors and defense attorneys in the trial of a former executive charged in a 2012 U.S. meningitis outbreak offered jurors opposing theories Thursday about a public health crisis that killed 64 people and injured about 700 others in 20 states.

Barry Cadden, the co-founder and former president of the New England Compounding Center, is charged in a massive racketeering indictment with second-degree murder in the deaths of 25 people, as well as fraud and other charges.

During closing arguments, Assistant U.S. Attorney Amanda Strachan told the jury that Cadden ran the company in an "extraordinarily dangerous" way, leading to contaminated steroids being shipped around the country, where doctors — trusting they were safe — injected them into patients who then became sick or died.

"It was preventable, but it happened because this man — Barry Cadden — decided to put profits before patients," Strachan said.

She said Cadden cut corners and failed to follow industry regulations for cleanliness and sterility in the so-called "clean rooms" at NECC, where drugs were manufactured. She said NECC did not sterilize drugs long enough, didn't test large enough samples and shipped out drugs before receiving the results of sterility tests.

"How could he know that these drugs were sterile and safe when he skipped all of these important steps? He couldn't," Strachan said. "He put patients' lives at risk, and that is second-degree murder."

She ended her closing argument by showing the jury photographs of each of the 25 people Cadden is charged with killing through what she called his "wanton and willful disregard" for human life.

Cadden's lawyer, Bruce Singal, told jurors that Cadden is not responsible for the deaths.

"As horrible as each of these stories is, there is nothing that shows that Mr. Cadden did something that the government can link to the death of that person," Singal said.

Singal said Glenn Chin, the supervisory pharmacist, was responsible for the day-to-day operations in the clean rooms and repeatedly allowed employees to cut corners, going against instructions from Cadden to "do it right." Chinn, who faces similar charges, is expected to go on trial after Cadden. He has pleaded not guilty.

Singal reminded jurors about emails Cadden sent to an outside cleaning service reprimanding the company after he learned its employees had not followed proper procedures. Singal said prosecutors have "massively piled on" and appealed to the jurors' emotions to try to convict Cadden of murder.

"This is indeed a tragic death case, but it is not a murder case, and there is a big, big difference between the two," Singal said.

Singal played the jury a recording of a voicemail message Cadden left for a client after the outbreak was discovered, instructing the client to quarantine the steroids.

"We consider this an emergency," Cadden said.

Jurors were expected to begin deliberations late Thursday after receiving instructions on the law from the judge.