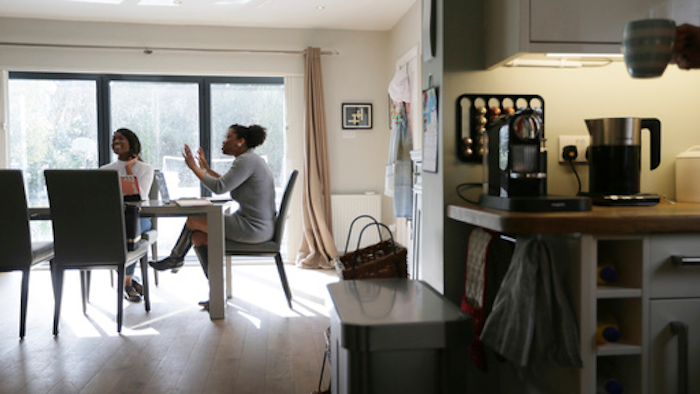 In this photo taken on Monday, Feb. 27, 2017, Spacehop users Lavinia Osbourne, right, and Whitney Fangawa pose for a picture in one of the homes available for hire as office space on the Spacehop website, in London. The rise of self-employment and soaring office costs are fueling demand for shared office space in metropolitan areas, with a handful of firms renting workspace by the hour, similar to the way Airbnb offers overnight stays. Vrumi, founded in 2015, says it has 5,000 registered users and 120,000 square feet of rentable workspace across the U.K. London-based Spacehop joined the market last year, as did Breather, a four-year-old company that also operates in the U.S. and Canada.
AP Photo/Tim Ireland

LONDON (AP) — Claire Brynteson had a house, a job and a dining table that was empty once she got her three children out the door every morning.

When she received a flyer telling her she could make money by renting seats at the table to people looking for short-term office space, she jumped at the chance to list its virtues on the Spacehop website — where Airbnb meets the laptop entrepreneur.

"I wondered why perhaps it had taken so long since Airbnb has been running for so long," Brynteson said at her home in south London. "People have for a long time been making money out of their home with guests staying over the night and paying to be there. This is a little less intrusive."

The rise of self-employment and soaring office costs are fueling demand for shared office space in metropolitan areas, with a handful of firms renting workspace by the hour, similar to the way Airbnb offers overnight stays. Vrumi, founded in 2015, says it has 5,000 registered users and 120,000 square feet of rentable workspace across the U.K. London-based Spacehop joined the market last year, as did Breather, a four-year-old company that also operates in the U.S. and Canada.

It's the latest development of the so-called sharing economy, where those looking for extra cash are generating income any way they can with the help of the internet and smartphone apps. Space itself has become a commodity, with people renting their driveways to commuters searching for parking, attics to apartment dwellers in need of storage and garden plots to those who want to grow their own tomatoes.

Boxful in Hong Kong promises to declutter your life by collecting and storing unneeded belongings. In Spain, LetMeSpace provides a marketplace to rent out anything from parking spaces to unused storage. Pubs are renting out space in the morning to people looking for peace to work, said Catherine Cottney, manager of trends at business research firm Mintel.

"It's the final frontier," Cottney said. "People are recognizing the worth of space and they're looking to maximize that."

With an abundance of investors and a computer-literate entrepreneurial population, the U.K. is driving the trend in Europe. In Britain, platform revenues more than tripled to 850 million pounds ($1.1 billion) in the three years through 2015, according to a study by PwC. Peer-to-peer accommodation, which includes shared office space as well as overnight stays like Airbnb, accounted for 27 percent of that total. Globally, PwC estimates that revenues in the sharing economy were about $15 billion in 2015.

The move toward new workspaces dovetails with changes in the workplace itself.

Cary Cooper, an expert on workplace issues at Alliance Manchester Business School, said he's surprised the Airbnb model didn't come to office space sooner, and he believes it will grow as millennials seek flexibility and others seek to make a living. Recent figures from the Resolution Foundation think tank found that self-employment accounts for 45 percent of the growth in employment in Britain since 2008.

"It's an outgrowth of the recession and an outgrowth of people being re-employed on a contingency basis," said Cooper. "Big employers don't want to make a commitment to people."

Lavinia Osbourne started her own financial counseling business in the wake of the global economic crisis but found working at home was too difficult when she needed to meet clients. She struggled to find peace and quiet working in coffee shops and hotel lobbies.

"I hate Starbucks," the 40-year-old entrepreneur said. "It's noisy. It's dirty. Sometimes you can't find a place to sit. You can't find a socket that works."

"Sometimes, if you are there too long, the maître d' or the staff can give you a little funny look," she said.

Her solution? Brynteson's dining table, where filmmakers, entrepreneurs and novelists sit down to work with other creative people.

There, for 22 pounds a day, "hoppers" get one of eight places at the table, WiFi, and access to the kitchen and bathroom. Fringe benefits include sliding glass doors that look out over a tree-lined garden and visits from Coco, the family cat.

Brynteson had been an Airbnb host and was accustomed to the idea of allowing people into her home. When she realized people would pay for a seat at her table, she teamed up with Spacehop.

"It's just sitting there empty anyways," she said.

The company vets both the host and client for the transaction, verifying the mobile phone, e-mail and identification. So far, there have been no major issues, though there's an insurance policy that covers any gaps in a home insurance policy for claims or damage. Brynteson also does her own due diligence to make sure she's comfortable with the guest.

The portable office represents a step forward from a time when the budding entrepreneur would find a coffee house and look for a free chair close to an electrical outlet. Freelancers and self-employed people need the ability to work without distractions, network with others in the same position and speak with clients with some degree of confidentiality. And for those in companies, open plan offices also make it hard for people who work for the same company to talk.

"The way we work is changing," said Roddy Campbell, the founder of space rental firm Vrumi. "People like being with people but offices are the worst places to get things done."

Campbell said the business isn't just about laptop startups either.

Vrumi takes a lot of bookings from small groups who work at larger companies but need time away from the phone calls, email and office noise — for instance senior managers who want to meet without being seen or distracted.

Consultancy PwC estimates that the sharing economy will continue to expand. In Britain, it expects 30 percent growth annually over the next decade, generating 18 billion pounds of revenue for platforms and facilitating 140 billion pounds worth of transactions a year by 2025.

"We thought growth would have tailed off," said Robert Vaughn of PwC, "but it's actually accelerating."

5 Best Industries for Entrepreneurs in 2017