DETROIT (AP) — General Motors will temporarily close five factories next month as it tries to reduce a growing inventory of cars on dealer lots.

The factories will close anywhere from one to three weeks due to the ongoing U.S. market shift toward trucks and SUVs, spokeswoman Dayna Hart said Monday. Just over 10,000 workers will be idled.

The company's Detroit-Hamtramck factory and Fairfax Assembly plant in Kansas City, Kansas, each will be shut down for three weeks, while a plant in Lansing, Michigan, will be down for two weeks. Factories in Lordstown, Ohio, and Bowling Green, Kentucky, each will be idled for one week.

The factories make most cars in the General Motors lineup including the Chevrolet Cruze, Camaro, Corvette, Malibu, Volt and Impala; the Cadillac CT6, CTS and ATS; and the Buick Lacrosse.

At the current sales pace, GM dealers have enough Malibus to last for 84 days and enough Camaros to last for 177 days, according to Ward's Automotive. Normally automakers like to have a 60-day supply on lots.

Last month, trucks and SUVs made up almost 62 percent of all vehicles sold in the U.S., a record level.

GM, like other automakers, was caught with too many cars on dealer lots as the shift continued, said Jeff Schuster, senior vice president of forecasting for the LMC Automotive consulting firm. Automakers have started discounting cars, but they need to cut production as the shift continues, he said.

"There's nothing that suggests a move back to cars," Schuster said.

He predicted strong December sales but said it won't be enough "to overcome some of this bloating of inventory."

Buyers are snapping up SUVs largely because they like the high seating position and the ability to haul things. Gasoline prices around $2 per gallon have helped the sales, but SUVs also have become more fuel efficient in the past five years.

GM's inventory of vehicles on dealer lots at the end of November stood at 874,162, up 26.5 percent from the same time a year ago.

Workers at the plants will get company supplemental pay and unemployment benefits that add up to most of their pay. 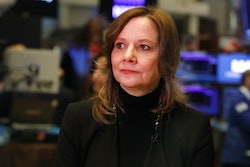