Nevada has pledged up to $335 million in incentives to the upstart electric car company that is promising to have a vehicle rolling off a $1 billion assembly line by 2018.

LAS VEGAS (AP) — Work has been suspended at a site outside Las Vegas where Nevada has pledged up to $335 million worth of incentives to an upstart electric car company that promises to have a vehicle still on the drawing board rolling off a new $1 billion assembly line in 2018.

The idling of the Faraday Future project at the Apex Industrial Park site in North Las Vegas was characterized by company spokesman Ezekiel Wheeler as a "temporary adjustment, or a work stop."

Wheeler said hitting pause will let the company direct money and attention to developing the concept car it wants to present at the big Consumer Electronics Show in Las Vegas in January. "Our refocusing is to ensure we bring a cutting-edge vehicle to a very dated system ... and show the world what we're capable of," Wheeler said.

"We want to fully fulfill our promise to the state of Nevada for the three million-square-foot facility," he added.

The contractor, industrial construction firm AECOM, said it has completed grading and foundation work, and it expects the go-ahead to resume construction next year.

"At this time, Faraday Future is temporarily adjusting their construction schedule with plans to resume in early 2017," AECOM spokesman Brendan Ranson-Walsh said in an email statement. "We remain fully committed to our client and our employees working on this project, and we look forward to the facility's successful delivery."

In a statement, Steve Hill, chief of the Governor's Office of Economic Development, vowed Tuesday that the state will be protected "in the event the full factory does not open to produce and sell cars."

"Faraday Future does not earn abatements until they have invested $1 billion on the site," Hill said, and the state won't issue bonds to fund infrastructure until the company "provides security equal to the amount of the bonds."

Bond funding isn't expected to occur until next at least September, Hill added, and it will need approval by the state Board of Finance. The five-member board is chaired by the governor and includes state Treasurer Dan Schwartz, Controller Ron Knecht and two appointed members.

Schwartz has been a critic from the start of the Faraday Future project relying on what he called "financing by a mysterious Chinese billionaire for a project in a financially challenged municipality."

Schwartz said he remains skeptical the project will succeed. "I think he's out of money," Schwartz said of Chinese entrepreneur Jia Yueting, the financial backer of the electric car effort.

Wheeler and Hill each acknowledged that Jia has faced questions about the sustainability of a swift business expansion aimed at attracting U.S. customers. One of Jia's Chinese companies, LeEco, unveiled a sleek smartphone last month to compete with Apple's latest iPhone and Google's Pixel phone.

In July, LeEco announced it was buying Vizio, a leading North American brand for smart TV and sound bar sales. "We understand his rapid growth ... (and) questions about overexpansion and cash issues," Wheeler said.

But Wheeler insisted the electric car project is a top Jia priority. Hill, the state economic chief, said, "LeEco has announced that it will become more disciplined in the management of its enterprises." 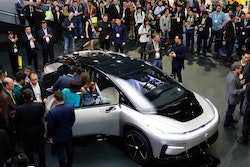 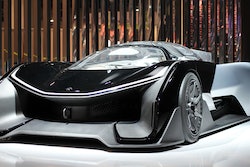