Katrina Bookman was playing penny slots when the screen indicated she had won a $42.9M payout. But when she tried to collect, the casino told her it was all a big mistake. 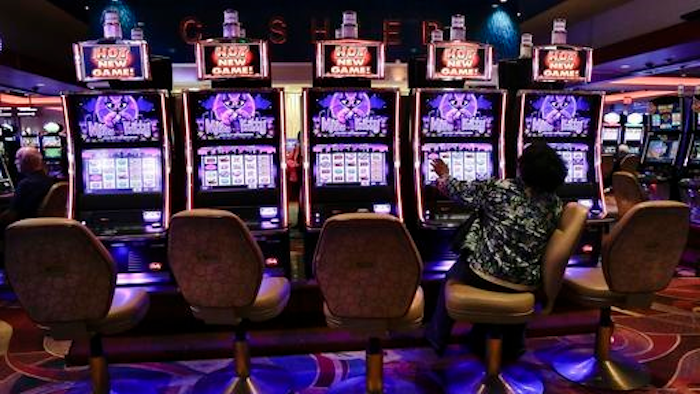 In this Oct. 3, 2014, file photo, a visitor to the Resorts World Casino at the Aqueduct racetrack plays an electronic slot machine, in the Queens borough of New York. The casino said on Nov. 3, 2016, that a woman who was shown that she won nearly $43 million on a penny slot in August 2016 actually won $2.25.
AP Photo/Julie Jacobson, File

NEW YORK (AP) — A woman who appeared to win a life-changing $42.9 million jackpot at a New York City casino is threatening to sue after being told the big payout she was shown was simply the result of a malfunction.

Katrina Bookman was playing the penny slot machine at Resorts World Casino in August when it displayed a message that read, "Printing Cash Ticket. $42,949,642.76." She even took a selfie next to the screen to celebrate. But when Bookman tried to collect, the casino told her it was all a big mistake and she was only owed the $2.25 balance she had on the machine.

"Machine malfunctions are rare, and we would like to extend our apologies to Ms. Bookman for any inconvenience this may have caused," the casino said in a statement

The New York State Gaming Commission investigated and said the bogus payout was "clearly a display malfunction." The machine was taken out of service, repaired and put back a day later, the commission said.

The machine's maximum payout is $6,500. Resorts World tells The Associated Press that the Gaming Commission told it the casino cannot legally pay Bookman even that amount because a malfunction voids all plays under state law. However, the Gaming Commission told the AP that there are no rules barring Resorts World from offering Bookman money to resolve the situation, even though she didn't win anything.

Resorts World said Bookman printed out a voucher ticket to receive her $2.25 balance on the machine, but her lawyer disputes that.

Alan Ripka sent a letter to the casino demanding it resolve what he describes as "a terrible situation." The casino responded that the machine's manufacturer should be held liable, Ripka said. He believes a lawsuit could be Bookman's only option and added that the court can figure out who's at fault.

Ripka is hoping Resorts World will "come up with a resolution" to the dispute. He questions whether the broken machine means everyone who used it prior to Bookman should also get their money back.

"If the machine was broken, does that mean nobody could have ever been a winner?"