Volvo unveiled upgraded versions of its upscale S90 sedan range, which will be manufactured entirely in China for export, signaling growing confidence in its Chinese production base. 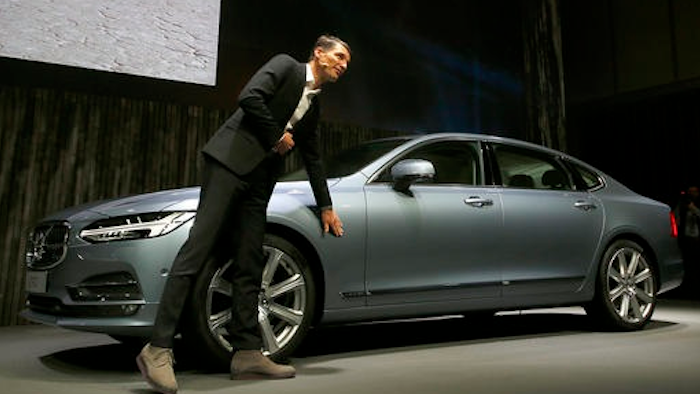 Thomas Ingenlath, Vice president of Volvo Cars design, shows a new S90 Volvo car in Shanghai, China, Wednesday, Nov. 2, 2016. Volvo Cars and its Chinese owner are revving up their profile as they focus on selling premium cars in world markets. The companies announced a strategy Wednesday that includes a new factory to make vehicles based on a new shared platform, including vehicles for Geely's new "connected car" brand, Lynk & Co.
AP

SHANGHAI (AP) — Volvo Cars and its Chinese owner are gearing up to export more premium cars to world markets.

Outlining its latest strategy Wednesday, Volvo unveiled upgraded versions of its upscale S90 sedan range, which will be manufactured entirely in China for export, signaling growing confidence in its Chinese production base.

Design touches on some of the S90 models also highlighted Volvo's focus on the vital Chinese auto market. Most notably, a "super luxury" version replaces the front passenger seat with a touchscreen console, with space to store shoes underneath, a feature clearly aimed at China's chauffeur-driven executives.

Volvo and its parent company Geely also announced plans for a factory to make compact cars based on a new shared platform, including vehicles for Geely's just-launched "connected car" brand, Lynk & Co.

It's part of Volvo Cars' efforts to compete with other luxury car brands both globally and within China, the world's No. 1 market, after it was bought by Zhejiang Geely Holdings in 2010.

"We have a strong manufacturing structure in China and we are geared up for further growth on this key market," Volvo CEO Hakan Samuelsson told reporters.

The new plant will produce Volvo's new 40 series based on its Compact Modular Architecture platform, which will also be used for Lynk & Co vehicles, a brand Geely launched last month.

The factory, currently under construction in Luqiao, 350 kilometers (220 miles) south of Shanghai, is owned by Geely but will be operated by Volvo.

The platform is one of just two underpinning Volvo's entire lineup. They give the company flexibility to build a wide range of vehicle sizes and body styles, helping it compete with bigger rivals.

Volvo added a long wheelbase version of its top-of-the-line S90 sedan as well as the "super luxury" Excellence edition aimed at China's chauffeured business class, who typically desire a more spacious backseat. The S90 Excellence's "lounge console" with its touchscreen monitor on retractable arms takes all of the front passenger side. The car comes with a panoramic sunroof and handmade Swedish crystal glasses.

Samuelsson said the two new versions "will be the most luxurious cars ever produced in China" when Volvo's two-year-old plant in Daqing, Heilongjiang province starts making the S90 range in the coming months.

"The fact that these cars will be exclusively built in China for the global market demonstrates the quality of our Chinese factories," he said.

With only a few thousand vehicles dispatched annually from China, "the number of Volvos going to the U.S. is still small. But the important takeaway is that shipping to the U.S. means Volvo China operations have achieved world-class quality," said Michael Dunne, president of Hong Kong-based investment advisory firm Dunne Automotive .

Volvo's factories in Gothenburg, Sweden and Ghent, Belgium will continue to make sedans, hatchbacks and sport-utility vehicles in all three model ranges. It's also building a plant in South Carolina to make midsized vehicles.