Some are calling that offer, first made public this month, an outright bribe. 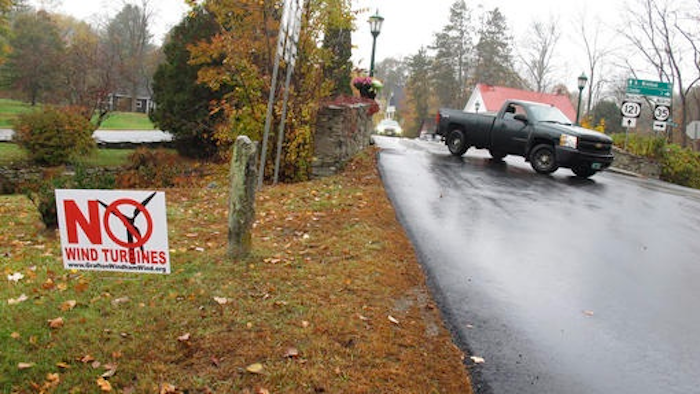 A yard sign opposing an industrial wind project sits at the side of the road in Grafton, Vt. Voters in Grafton and Windham are going to cast ballots Nov. 8 on whether to go forward with a plan for 24 turbines in the two communities. Developer Iberdrola Renewables is offering residents of the two towns direct payments if the project is built.
AP Photo/Wilson Ring

GRAFTON, Vt. (AP) — Political style yard-signs with the giant word "NO" over the image of a wind turbine pop up on roads leading into the southern Vermont town of Grafton, evidence that yet another community in the state is debating whether to become home to an industrial wind farm.

But added to an already emotional debate in Grafton and neighboring Windham is the developer's promise of direct payments to residents of the two towns if voters approve the project Nov. 8. Some are calling that offer, first made public this month, an outright bribe.

The Vermont attorney general's office has found nothing improper about the proposed payments and nothing that would violate state election laws, but the ruling has done little to quiet the critics.

Representatives of the developer, Iberdrola Renewables, say the idea for the payments — estimated at $1,162 per year for full-time adult residents of Windham and $428 for Grafton residents — came from the locals themselves who were looking for a way to spread the benefit of the turbines beyond reducing property taxes. The towns would also get other payments from Iberdrola.

Mary McCoy, a 14-year Windham resident whose husband was part of the group that suggested and helped negotiate the payments, said the idea has in fact fueled notions that it's all a bribe.

"If it had happened in a timely fashion a year ago, or even six months ago, and people had had time to understand it, I believe it wouldn't have felt like a bribe," said McCoy.

Grafton Select Board member Skip Lisle, an opponent of the project, called the promise of money "troubling" because it is pitting neighbor against neighbor.

"It's the first time in our 250-year history of self-government that a foreign corporation has taken over the town," said Lisle, who lives not far from where some of the turbines would be built.

Vermont Secretary of State Jim Condos sent a letter to some residents last week, calling the offer "particularly disturbing." But he later clarified in an email to The Associated Press that his letter was based on the notion that the payments were going to "registered voters" in the two towns, not full-time residents.

"We haven't looked at that reference," he said.

Condos said he had no plans to revisit the issue, noting that the attorney general has already said it wouldn't violate any laws.

For the last four years, Iberdrola, the Spain-based worldwide renewable energy company, has been talking about building turbines on the mountain tops in the two communities. The towns, with a combined population of about 1,000, lie about 30 miles from where Vermont, New Hampshire and Massachusetts meet.

The plan calls for the construction of 24 turbines, 16 in Windham and eight in Grafton. They'd produce enough electricity to power about 30,000 homes.

"They have been looking at a wind farm as a suitable fit for this land while simultaneously being able to keep the land open for hiking, hunting and fishing and snowmobiling," Copleman said.

But opponents say the site is pristine wilderness that would be forever scarred by the visual blight of the turbines. There are also concerns about environmental damage during construction and the long-term health effects that would be felt by people who live nearby.

Most Vermont communities that have been offered a chance to vote on wind projects have rejected the projects, according to Annette Smith, an anti-wind energy activist who has tracked votes on the issue.

A single facility can churn through millions of gallons of water per day keeping equipment cool.
Oct 26th, 2021

The mandate for federal contractors goes into effect in December.
Oct 25th, 2021
Follow Us
Most Recent