Workers walked out during annual wage negotiations for 212 hours from July and September, disrupting manufacturing of about 95,000 vehicles. 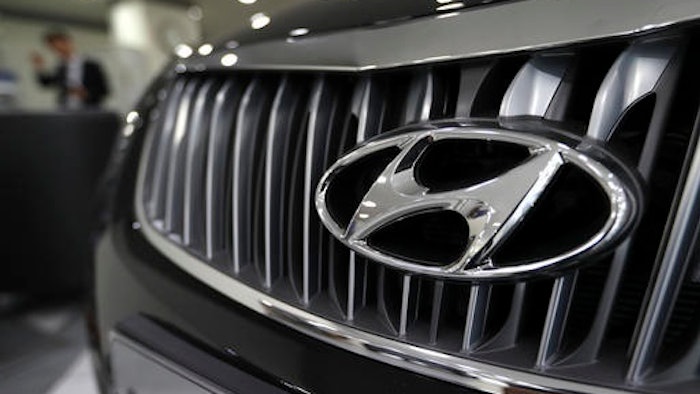 SEOUL, South Korea (AP) — Hyundai Motor's third-quarter profit fell to its lowest level in nearly seven years, well below forecasts, due to a strike that dented production and weak demand in emerging markets.

That was the lowest profit since the first quarter of 2010, when Hyundai adopted international financial reporting standards.

Analysts had forecast 1.3 trillion won in earnings according to FactSet, a financial data provider.

Hyundai, part of the world's fifth-largest auto group, said its sales in January-September declined 2 percent from the year before to 3.5 million units, falling both at home and overseas.

It blamed production disruptions from a strike. Workers walked out during annual wage negotiations for 212 hours from July and September, disrupting manufacturing of about 95,000 vehicles.

Modest demand in Europe and the United States and sluggish sales in Brazil and Russia offset sales growth in China, Hyundai said.

Hyundai, the maker of Sonata and Genesis sedans, has been struggling to increase its production of sports utility vehicles that have seen growing demand around the world. It also has launched the Genesis luxury sedan as an independent brand to boost its brand image and profit margin.

But the company's market share in South Korea has been falling. Quality issues also have marred its reputation at home and abroad.

Yonhap news agency reported Tuesday that Hyundai is cutting salaries of 1,000 of its executives by 10 percent starting this month.