The long-anticipated rules would mean drone operators would be able to fly without special permission. 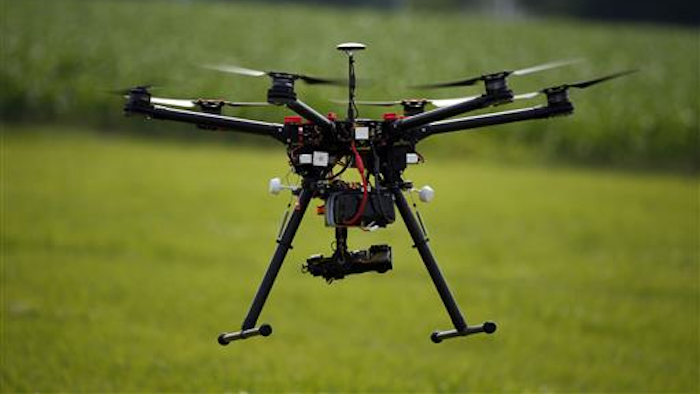 A hexacopter drone is flown during a drone demonstration at a farm and winery on potential use for board members of the National Corn Growers, Thursday, June 11, 2015 in Cordova, Md. Routine commercial use of small drones got a green light from the Obama administration June 21, 2016, after years of struggling to write regulations that would both protect public safety and unleash the economic potential and societal benefits of the new technology.
AP Photo/Alex Brandon

WASHINGTON (AP) — The Obama administration is on the verge of approving routine commercial use of small drones, after years of struggling to write rules that would both protect public safety and free the benefits of a new technology.

The Federal Aviation Administration is expected to announce as early as Tuesday the creation of a new category of rules for drones weighing less than 55 pounds. The long-anticipated rules would mean drone operators would be able to fly without special permission.

Currently, they have to apply for a waiver from rules that govern manned aircraft, a process that can be time-consuming and expensive.

Since 2014 the FAA has granted more than 6,100 waivers and another 7,600 are waiting for approval. Many more small companies have been using drones without FAA permission, say industry officials.

Unless those operators make a serious mistake that brings them to the FAA's attention, there's not a lot the agency can do to track them down. The new rules would provide an easier way for those businesses to operate legally.

The rules also would effectively lift the lid on flights by other potential operators who have held off using the technology — real estate agents who want bird's eye videos of properties, ranchers who want to count cattle and a multitude of other businesses.

A summary of the new rules from last month was inadvertently posted online by the FAA, then removed Monday after it was reported by aviation bloggers. FAA officials declined to comment on the posting.

The summary says operators must register their drones online and pass an aviation knowledge exam for drone pilots at an FAA-approved testing center. That would give them a drone pilot certification that's good for 24 months. Operators must also present identification for a security vetting similar to that applied to general aviation pilots.

Operators also have to follow many of the rules that apply to model aircraft hobbyists — keep drones within sight at all times, and not fly them at night, over people or higher than 400 feet. The minimum age for commercial operators would be 16.

Operators who want to fly near airports would have to get special permission first.

The rules would still prevent delivery drones from flying across cities and suburbs clasping small packages, in part because that would entail flying over people. Amazon and Google announced two years ago that they are working on drone delivery systems for goods purchased online, and Google officials have said they expect deliveries to begin sometime in 2017.

Earlier this year, the Senate passed an aviation bill that would require the FAA to issue regulations within two years to enable drone deliveries. The House has been unable to pass its own version of the bill due to unrelated controversies.

Congress has been prodding the FAA for more than a decade to write rules to enable broad access to the national airspace by civilian drones. Initially, the agency put its emphasis on finding ways to enable larger drones like those used for military missions to safely fly at the same altitudes as airliners and other manned aircraft. After several years, the agency shifted its focus to small drones when it became clear that the market for their uses was developing much faster.

But the FAA's slow pace led frustrated lawmakers to include a provision in a major aviation bill four years ago setting deadlines for the agency to issue regulations to safely integrate small drones into the national airspace by August 2014 and other drones by September 2015.

The rules expected this week would fulfill that first deadline. The agency is also working on an array of other safety rules and standards to further broaden the circumstances under which drones can be flown. In April, FAA officials said they were drafting regulations based on recommendations from an industry advisory committee that would allow flights over people by drones weighing about 2 ½ pounds or less.

Next month, another government-industry advisory committee is expected to recommend safety standards to the FAA for unmanned aircraft flights at higher altitudes.