The report will be discussed at the Fed's upcoming June meeting, and the information could be cited as a reason to hold off on a rate hike. 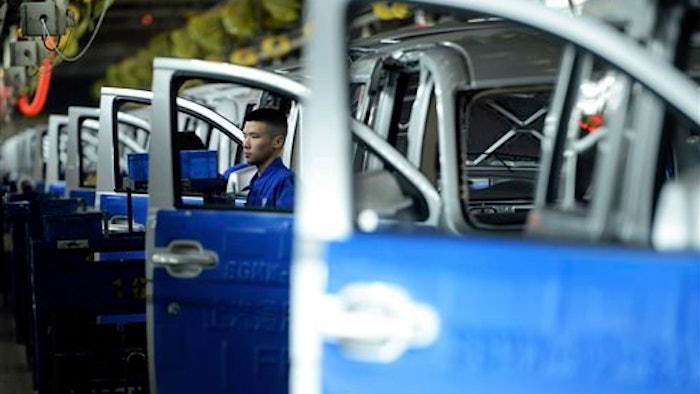 WASHINGTON (AP) — The Federal Reserve said Wednesday that the economy grew at a modest pace in much of the country from April to mid-May, leading to tightening labor markets and higher wages.

The Fed's latest survey of business conditions found that half of its 12 regions described growth as modest, while Dallas said economic activity had increased "marginally." Two districts — Chicago and Kansas City — said growth had slowed from the past report. New York described activity as "generally flat."

The report, known as the Beige Book, will be discussed at the Fed's upcoming meeting on June 14-15. The information in the report could be cited as a reason to hold off on a rate hike.

While employment grew only modestly since the last report, "tight labor markets were widely reported" in most areas, according to the Beige Book. Employers across the country were having a harder time finding workers to fill jobs. Wages were up modestly, especially in areas where workers were in high demand.

In Atlanta and Richmond, "high-skill workers in high-demand fields continued to be hard to find, and low-skilled jobs were also becoming harder to fill," the Beige Book said.

Fed Chair Janet Yellen said Friday that an interest rate hike would be appropriate in the coming months if the economy kept improving. In an appearance at Harvard, Yellen said that while economic growth was relatively weak at the end of last year and the beginning of this year, the economy appeared to be picking up based on recent data.

But various reports are painting a mixed picture. The government on Tuesday reported that consumer spending surged in April, but a separate report Wednesday showed that construction spending suffered widespread setbacks in the same month.

The Beige Book also presented a mixed view of conditions. It was based on readings from the 12 Fed regional banks that were collected before May 23.

The report found that the energy sector, which has been under pressure with falling prices, remained weak. Oil drilling continued to contract in the Dallas, Kansas City and Minneapolis districts.

Anticipation of a rate hike at either the next June meeting or in July has been rising since the Fed released the minutes of its discussions at its April meeting. The minutes showed that Fed officials believed the strengthening economy might warrant a rate hike in June.

But the gathering will take place only a week before British voters decide whether to support a move to leave the European Union. The Fed may be reluctant to raise rates in advance of the British vote. Analysts believe a hike at the July 26-27 meeting is more realistic.

Yellen is scheduled to speak on the economy and interest-rate policy in Philadelphia on Monday.

The Fed raised its key policy rate for the first time in nearly a decade in December, pushing the rate from a record low near zero to a range of 0.25 percent to 0.5 percent. But after increased global weakness and financial market turmoil in January and February, the Fed has kept rates unchanged so far this year.