Baby Boomers with pensions were far more likely to make long term commitments to one employer. 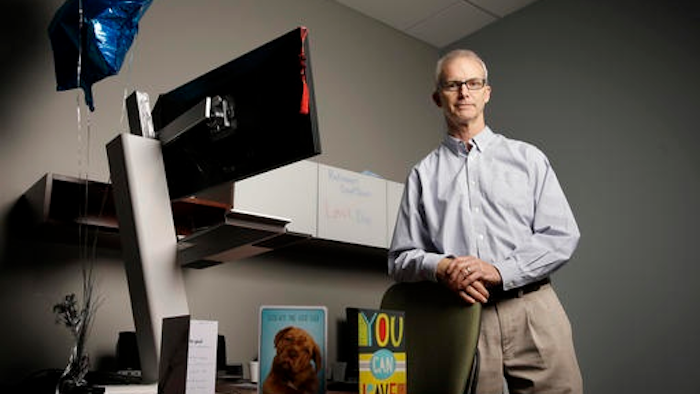 David McQuinn poses for a photo in his office at MiTek, a construction and engineering firm, Tuesday, May 10, 2016, in Chesterfield, Mo. McQuinn, 61, is retiring Tuesday after 30 years with the suburban St. Louis company, a length of time with one employer that is unlikely to be achieved by many younger workers.
AP Photo/Jeff Roberson

CHICAGO (AP) — A new poll says more than 40 percent of America's baby boomers stayed with their employer for more than 20 years. But it's unlikely that their children or grandchildren will experience the same job tenure.

The survey of more than 1,000 Americans 50 and older by the Associated Press-NORC Center for Public Affairs Research shows that 41 percent of those employed workers have spent two decades with the same company, including 18 percent who've stayed at least 30 years.

But it's a trend more common among the older baby boomers than younger ones, and traditional pensions appear to be one of the driving factors.

Among those who have had at least 20 years with a single employer, the survey found that about half are excited about retirement, but a third are anxious about their post-work lives.

David McQuinn, 61, is retiring Tuesday after 30 years with MiTek, a construction and engineering firm in suburban St. Louis. He says there were times he thought about leaving but he liked his co-workers and his senior position and also owned stock in the company.

"I started working young and I've been a man in a hurry my whole life," he says, "and now I'm in a hurry to not be in a hurry."

His experience exemplifies a trait among boomers: more attachment to the company than the younger generations. But even among older Americans there's a gap in employment tenure: Half of those aged 65 and up but only a third of those age 50 to 64 have stayed with the same employer for at least two decades.

The shift may be less about differences in attitude than changes in jobs — and benefits.

Those defined benefit pension plans are slowly disappearing. The Bureau of Labor Statistics reported that only 18 percent of private workers were covered by these plans in 2011, down from 35 percent in the early 1990s. More common now are plans like 401(k)s, which are more portable from one employer to another.

The agency has reported that a larger proportion of older workers than younger workers had more tenure on the job. For example it said, in January 2014, the average tenure with the current employer was 7.9 years for people 45 to 54, compared to 10.4 years for those 55 to 64.

"Think of all the choices people have today. I mean, who ever heard of a social-media analyst five years ago?" says Joe Coughlin, the director of the Massachusetts Institute of Technology's AgeLab.

Coughlin says higher churn in the labor market also means companies will have to work harder to hire and retain the workers they need, and this creates leverage.

"Millennials think this way instinctively," he said. "They've seen their parents laid off by these large corporations, so there is less trust."

Christina Guerrero worked in the mid-1980s as a housekeeper at Austin's Brackenridge Hospital before applying for and getting a job as a clinical assistant.

She kept that job for 17 years, before moving to a neighboring children's hospital. Lifting children into hospital beds, she recalls, was easier on her back then moving adults.

"I thought about looking for other jobs, but almost any hospital these days would require me to go back to school to finish my GED, so that was a big reason for staying put," says Guerrero, now 61.

According to the AP-NORC survey, younger baby boomers were much more likely to have gone back to school in the past five years: 30 percent of those age 50-64, compared to 19 percent of those 65 and older.

Most went for additional training because their employer required it or they wanted to learn something new or fun. Only 17 percent said they received training to start a new career.

Joe Abraham, 65, says he's sure he "dodged a few bullets along the way" during his 36-year career as an attorney at Ford Motor Co.

Now retired, he says the raises and benefits he got from Ford were not worth giving up for something else. Plus, he just liked his colleagues.

The AP-NORC Center survey was conducted March 8-27 by NORC at the University of Chicago, with funding from the Alfred P. Sloan Foundation. It involved online and telephone interviews with 1,075 people aged 50 and older nationwide, most of whom are members of NORC's probability-based AmeriSpeak panel. Results from the full survey have a margin of sampling error of plus or minus 3.9 percentage points.