Million-Pound Deadweight Machine Back in Business

The largest deadweight machine in the world is back in one piece after a colossal 16-month effort to overhaul the system for the first time in 50 years. 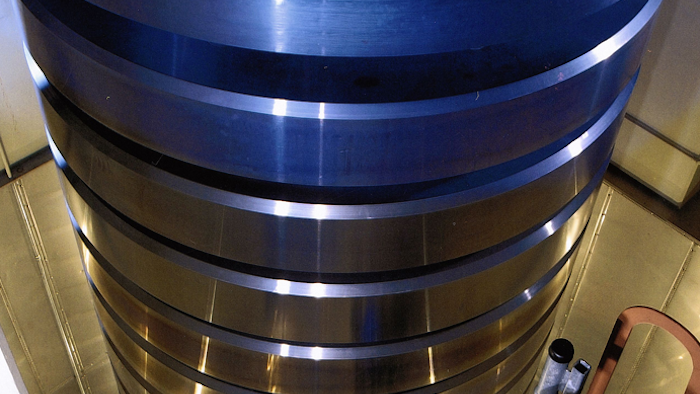 It’s official, NIST’s 4.45-million newton (equivalent to one million pounds-force) deadweight machine – the largest in the world – is back in one piece after a colossal 16-month effort to overhaul the system for the first time in 50 years.

The year-and-a-half-long saga involved dismantling, cleaning, restoring, and recalibrating about half of the stainless steel discs in the three-story stack of weights. It marked the first time the device had been taken apart since its original installation in 1965.

“This was an extremely complicated, time-consuming, labor-intensive operation with major risks and decisions at every turn,” says Mass and Force Group Leader Zeina Kubarych. “From planning to teamwork and coordination, to risk mitigation and execution, this was a remarkable achievement and a success to be proud of.

“Perfectly orchestrated restoration of one of NIST’s and the world’s metrology treasures with no injury to personnel and no damage to property – a big weight off my shoulders!”

The deadweight system consists of a calibrated “T-shaped” lifting frame and a stack of 19 stainless steel discs about three meters in diameter (a little less than ten feet) when assembled. Their average mass is about 22,696 kg (just over 50,000 pounds) each.

Lab officials from NIST visited the machine this month, just a few days after the last bolts were torque-wrenched into place. They received a tour of the facility, which includes a control room above the weight stack and a hydraulic ram that moves the weights up and down.

Deadweight Machine is Back

The company Boeing accused of causing delays is now seeking $20 million in damages.
Apr 19th, 2021
Follow Us
Most Recent