The last few bolts were tightened just weeks ago – by hand. 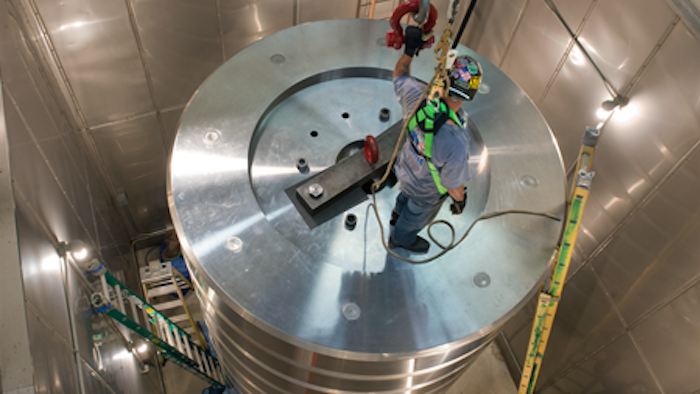 Now fully restored, NIST’s 4.45 meganewton (one million pounds-force) deadweight machine – the largest in the world – is back online and once again performing force calibrations for customers, which include U.S. aerospace manufacturers, U.S. military laboratories, and top-end commercial force calibration labs.

“Many of our large force calibration customers have had to put their own calibrations for their customers on hold until this repair was completed,” says project leader Rick Seifarth, who has been working with this unique machine for the past thirty years. “And that’s because their measurements are directly traceable back to the international unit of force through our calibrations. So without us in place, they were stuck.

“Needless to say, they are very, very happy to know that we’re back online.”

Refurbishing the system took almost a year and a half and included a complete overhaul of about half of the stainless steel disks that comprise the three-story weight stack.*

“Taking apart a machine for the first time in 50 years was a major undertaking, one that we didn’t take lightly,” says PML Deputy Director Carl Williams. “Observing its dismantling and repair was a great honor – a once-in-a-lifetime opportunity.”

NIST’s million pounds-force deadweight machine is designed to produce forces of up to 4.45 million newtons (equivalent to one million pounds-force) to calibrate force-measuring devices called load cells. Those calibrated load cells are then used by customers to measure large forces – for example, the thrust of a rocket or jet engine or the deflection of an airplane wing.

Forces are generated in the machine by hanging the stainless steel weights from the load cell being tested. The weight stack consists of a calibrated lifting frame and 19 nearly identical stainless steel discs about three meters in diameter (a little less than ten feet) when assembled, with an average mass of about 22,696 kg (just over 50,000 pounds) each.

The stack had to be refurbished because after 50 years of use, it was suspected that a type of damage called galling was occurring inside several key joints, causing the pieces to momentarily bind up or stick.

The overhaul began late in 2014 with the disassembly of the top half of the weight stack. It was an intense period that took several weeks.

“The system is literally worth millions of dollars, which meant that any mistakes during any phase of the operation could have unknown and severe consequences for NIST and our capacity to disseminate large forces to our customer base,” Seifarth says. “Translation: We could have ruined the machine.” In fact, they had to destroy some of the replaceable elements, such as bolts, during the initial disassembly process because they just wouldn’t come out.

After the disassembled pieces had been laid out on the floor, Seifarth’s team assessed them and found minor galling damage exactly where they’d suspected.

The larger pieces were sent off-site to a machine shop, where the damage was repaired by shaving a small amount – about a millimeter – of steel off the surface of the affected joints. Smaller parts, such as screws and bolts, were machined on-site at NIST. The surfaces were also coated with molybdenum disulfide (MoS2), or “moly,” an industrial lubricant that was not readily available when the deadweight machine was originally built.

To correct for the lost mass, small, carefully calibrated pieces of stainless steel were added back to the weights. They were placed into hollow cavities that had been built into the disks for this type of adjustment and then resealed.

Once repairs were finished, the individual weights themselves needed to be recalibrated – a major part of the restoration process.

All mass measurements need to be traceable to the world’s official definition for mass: a plum-sized cylinder of platinum and iridium called the International Prototype Kilogram (IPK). NIST’s Mass Lab staff, who performed the calibrations, had to start with their own 1-kilogram (about 2-pound) mass that had been directly calibrated against the IPK and work their way up to the 50,000-pound masses that comprise the million-pound weight stack. The calibrations were done with a series of mass measurements that compare larger weights to sums of smaller weights, in various combinations.

The process uses several different scales, from tabletop devices to a balance so large it was built into the floor. The mass standards that were used for this calibration “workup” included a range of values, from 1- and 2-kg weights in increments all the way up to 10-, 20-, and 30- thousand-lb weights.**

“Fortunately for us, the entire large mass calibration system [i.e. the mass standards themselves] has remained available and state-of-the-art at NIST,” Seifarth says. “I say fortunately because there would be nowhere else in the world for us to have our 50,000-lb masses calibrated except here at NIST.”

As with the demolition phase, the reassembly period was tense, but it went without a hitch – thanks in part to the “moly” coatings, Seifarth says. However, the process of reconstructing the machine yielded a few surprises.

“But I discovered, through study of the drawings and ancient texts, that there’s actually an additional weight of 25,000 pounds that could have been manipulated on and off of this stack, had a handling mechanism been designed and installed as originally considered. Unfortunately, that never came into being,” Seifarth says. “So rather than twenty 50,000-pound increments, all along we could have had forty 25,000-pound increments that would have been of huge benefit to many of our customers, I believe.”

“It took a little bit longer to finish this job than I was hoping, but it has been reassembled correctly, and of course the mass recalibrations have been just exquisite. The mass values for our 50,000-pounds-force weights cannot get any better.”

Now that it has been restored, Seifarth says the system will likely last another 50 years. But if the historic weight stack should ever need to be disassembled again, the team now has a fairly clear roadmap of how to do it. “We stubbed our toes often enough on this project that we know what to avoid next time, should it come to that.”

And if a new generation should be tasked with the overhaul, they will have significantly more detailed instructions than he had to work with. “They would just need to pull out my files,” he says drily. “I left them notes.”

*For more information about the restoration of NIST's million pounds-force deadweight machine, see:

**By convention, standard masses above 50 pounds (about 22 kilograms) are referred to colloquially in imperial instead of metric units.

Million-Pound Deadweight Machine Back in Business